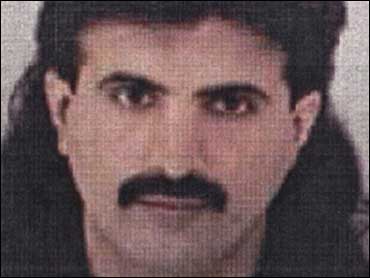 A man from Qatar has been designated as an enemy combatant of the United States -- for allegedly paving the way for al Qaeda operatives to settle in the US.

Ali Saleh Kahlah Al Marri has been in custody since 2001. The government's move puts him under the control of the Defense Department, without the rights afforded defendants in the civilian criminal justice system.

Al Marri is accused of lying to the FBI, and also of credit card fraud.

He's only the third person to be named publicly as an enemy combatant since the September eleventh attacks. The others are both U-S citizens -- accused dirty bomb plotter Jose Padilla and Yaser Esam Hamdi, a Louisiana native captured on the battlefield in Afghanistan.

A Justice Department official says Al Marri was "positively identified" as being part of a planned second wave of al Qaeda terrorist attacks by an "al Qaeda detainee in a position to know."

Officials would not identify that person, but have said that senior al Qaeda operative Khalid Shaikh Mohammed has provided a wealth of information about the network's presence in the United States.

Al-Marri's designation as an enemy combatant came after prosecutors Monday dropped the criminal charges against him.

Alice Fisher, deputy assistant attorney general for the Justice Department's criminal division, said the decision was made not because that case was weak but because it was the best way to deter future terrorist attacks.

Iyman Faris, the Ohio truck driver whose guilty plea on charges of aiding al Qaeda was unsealed last week, was allegedly one of Mohammed's operatives.

According to a statement on the now-defunct criminal indictment by the U.S. attorney for central Illinois, federal agents claim Al-Marri lied to them twice.

In a December 11, 2001 interview, he denied calling a telephone number in the United Arab Emirates that the feds say he had, in fact, dialed.

The number belongs to Mustafa Ahmed al-Hawsawi, an unindicted co-conspirator in the trial of suspected "20th hijacker" Zacarias Moussaoui.

Al-Marri was arrested the day after the second interview and held as a material witness.

He had 15 or more false credit card numbers on him at the time of his December 2002 interview, the U.S. attorney's office contends.

More than 600 men captured in Afghanistan are held as "unlawful combatants" on Guantanamo Bay, and a federal court has ruled they have no right to counsel.

Hamdi was arrested on the battlefield in Afghanistan, fighting alongside the Taliban.

Civil liberties advocates have challenged the government's right to detain people, especially U.S. citizens, without charging them or providing them with a chance to challenge the legality of their detention.

The Justice Department contends that it is customary in times of war to allow the president to detain people without trial.

Padilla won the right to a lawyer in a federal district court ruling in March, but the government has appealed. A federal appeals court has sided with the government in the Hamdi case.

The administration has also begun moving toward holding military tribunals for terrorism suspects.