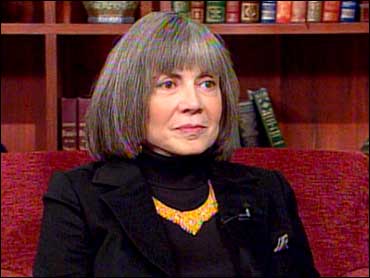 Author Anne Rice has had a religious conversion: She's no longer a Christian.

Rice, 68, is best known for "Interview With a Vampire" and other gothic novels. Raised as a Catholic, she had rejected the church early in her life but renewed her faith in recent years and in 2008 released the memoir "Called Out of Darkness: A Spiritual Confession."

In a telephone interview Thursday, Rice said she had been having doubts for the past two to three years. She was troubled by the child abuse scandals in the church, and the church's defensive reaction, and by the ex-communication of Sister Margaret McBride, a nun and hospital administrator who had approved an abortion for a woman whose life was in danger.

"I believed for a long time that the differences, the quarrels among Christians didn't matter a lot for the individual, that you live your life and stay out of it. But then I began to realize that it wasn't an easy thing to do," said Rice, speaking from her home near Palm Springs, California. "I came to the conclusion that if I didn't make this declaration, I was going to lose my mind."

In November 2005, Rice told "The Early Show" co-anchor Hannah Storm she would focus her writing exclusively on the life of Jesus Christ. "I went through a conversion, Rice said. "I went back to the Catholic church after 30 years of being an atheist. And I realized that I wanted to write just about Jesus Christ for the rest of my career, in one way or another."

Rice said she is a Democrat who supports the historic health care legislation signed into law by President Barack Obama and believes gay marriage inevitably will be permitted throughout the country. Although no longer part of any denomination, she remains a believer and continues to read theology and post Biblical passages on her Facebook page. She has no immediate plans to write about her leaving the church and will continue with her metaphysical fiction series, "Songs of the Seraphim."

Rice will not be taking up vampires again, but she said she is a big fan of the HBO series "True Blood," enjoyed the first two "Twilight" movies (she has yet to read any of the Stephenie Meyer novels) and is interested in seeing her most famous character, the vampire Lestat de Lioncourt, return to the screen.