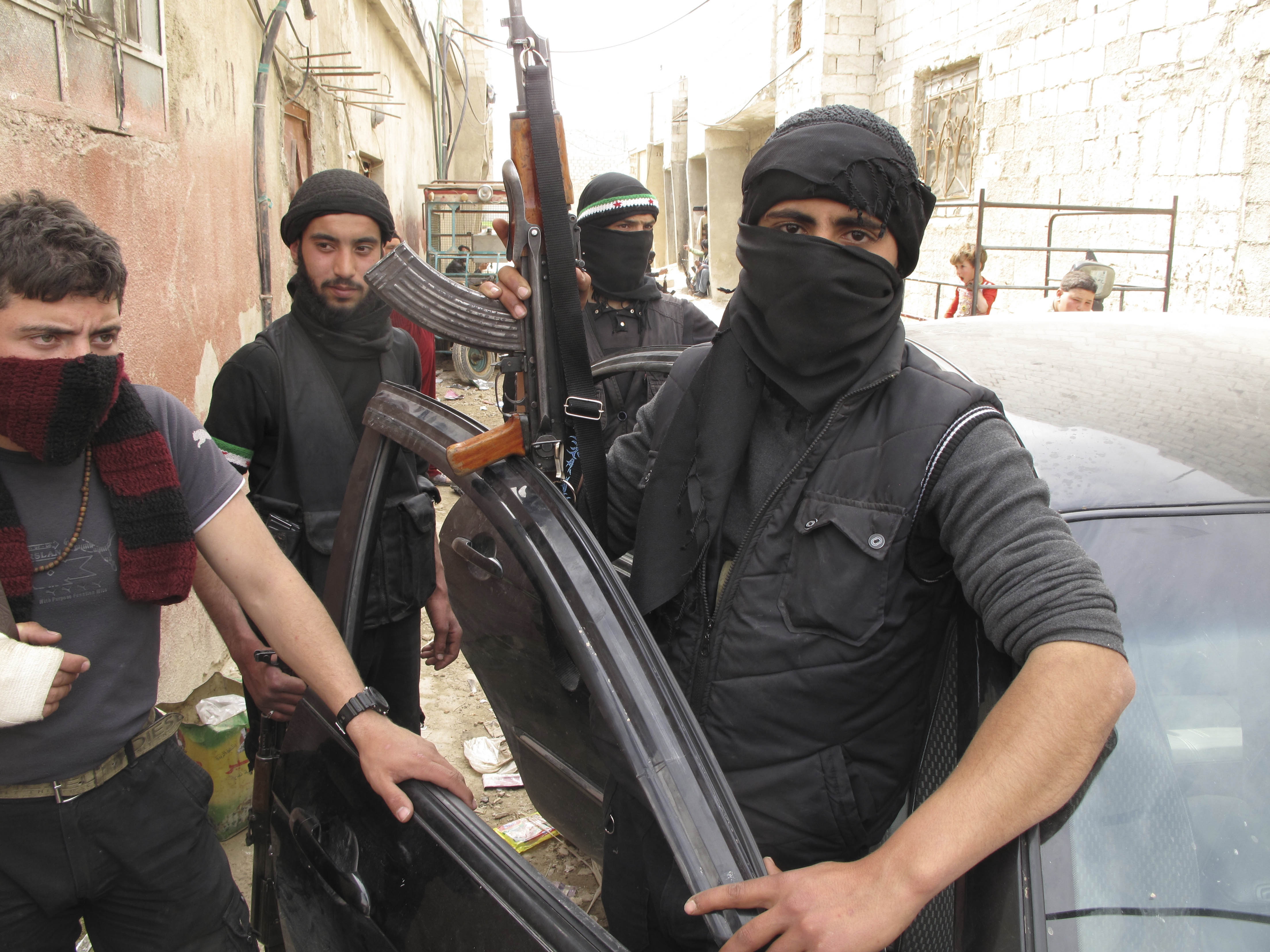 (CBS/AP) UNITED NATIONS - International envoy Kofi Annan told the U.N. Security Council on Monday that Syria informed him its military will complete the withdrawal of troops and heavy weapons from populated areas by April 10.

U.S. Ambassador Susan Rice said Annan received a letter from Syria's foreign minister on Sunday with the April 10 date and indicated he would have preferred an earlier deadline. She said Annan urged the Syrian government to start the withdrawal immediately and move no further into populated areas, and "that commitment was provided."

Syria's U.N. Ambassador Bashar Ja'fari said the April 10 deadline was set "by common accord" between Annan and the Syrian government, and he again pledged his government's complete support for Annan's six-point plan to end the yearlong Syrian crisis.

But Rice, the current Security Council president, expressed skepticism about Syria's commitment, saying that Damascus has made and broken promises over many months.

Clinton on Syria: "This is the moment of truth"
U.S. pledges $12M to Syria's rebels
Syrian official: Regime won't back down

"We have seen commitments to end the violence followed by massive intensifications of violence," Rice said. "So the United States, for one, would look at these commitments and say, yet again, the proof is the actions, not in the words."

She added: "Past experience would lead us to be skeptical and to worry that over the next several days rather than a diminution of the violence, we might, yet again, see an escalation of the violence. We certainly hope that is not so. We hope the Syrian authorities will implement the commitments they made without condition or codicils."

Given the skepticism, the Security Council was making contingency plans if Annan's deadline is not met, including sanctions and other more aggressive measures, reports CBS News foreign affairs analyst Pam Falk. But getting anything through the Security Council will still rely on China and Russia, who have twice protected Assad's regime from censure by the Council.

Annan's plan to end Syria's crisis calls for an immediate withdrawal of troops and heavy military equipment from populated areas, followed by an overall cease-fire — first by government forces and then by opposition fighters — to pave the way for talks by all Syrian parties on a political solution. It includes an immediate daily two-hour halt to fighting so humanitarian aid can reach suffering civilians, and unhindered access for humanitarian groups and the media.

Rice stressed that the Syrian agreement was just on the pullout of troops and equipment from cities and towns.

She said Annan is expecting details from the Syrian government "very shortly" on the other aspects of the plan.

One of the key issues is trying to unite the many different opposition factions under a single umbrella.

Rice said Annan's deputy, Nasser Al-Kidwa, has had "constructive exchanges with the opposition to urge them to cease their operations within 48 hours of a complete cessation of government hostilities."

Annan's plan is one of several international pushes to end the Syrian government's violent crackdown on its own people.

On Monday, more than 70 countries, including the United States, pledged to send millions of dollars and communications equipment to opposition groups inside Syria, signaling a growing belief that diplomacy and sanctions alone will not end the repression and push Assad from power.

"The goal is to help the opposition communicate with itself, communicate with the outside world, to help it to organize better and to help it have better situational awareness so it can evade a regime attack," U.S. State Department spokesperson Victoria Nuland said Monday.

Nuland wouldn't get into specific details, saying it would "defeat the purpose" of providing aid to the rebels, but said the U.S. had a "pretty modest program" in place already that "will now be expanding ... in scope."

Participants at the international diplomatic conference in Istanbul on Sunday said Saudi Arabia and other Gulf countries are creating a fund to pay Syrian rebels fighters known as the Free Syrian Army and soldiers who defect from the regime. One delegate described the fund as a "pot of gold" to undermine Assad's army.

Participants confirmed the Gulf plan on condition of anonymity because details were still being worked out. One said the fund would involve several million dollars a month. It is said to be earmarked for salaries, but it was not clear whether there would be any effort to prevent the money from being used to buy arms, an issue that could prompt stronger accusations of military meddling.

Anti-regime activists inside Syria welcomed the news, while worrying that the aid would be too little, too late.

"This is what we have been asking for, but if they had decided to do this months ago, we could have avoided a large number of martyrs," said Fadi al-Yassin from the northern province of Idlib. "We know that there is no way to topple the regime without force."

Neither Russia nor China accepted invitations to Sunday's conference, dubbed "Friends of the Syrian People."

But Russia appears to be growing impatient with Assad, urging Syria to withdraw their troops from city streets first.

"The Syrian government must take the first step and start the troop withdrawal in line with Kofi Annan's plan," Foreign Minister Sergey Lavrov said at a briefing in Yerevan following talks with his Armenian counterpart.

But Lavrov warned the West against giving ultimatums to Damascus, saying that the priority now should be to separate the warring parties and open the way for the delivery of humanitarian aid.

"Ultimatums and artificial deadlines rarely help," he said. "We all want a quick end to bloodshed, but that demand should be addressed to all warring parties in Syria."

Lavrov said Russia had chosen not to attend Sunday's meeting of the "Friends of the Syrian People" in Turkey's second biggest city Istanbul because its organizers had failed to invite Syrian government representatives.

"I think such an approach is dangerous and contradicts Kofi Annan's efforts," he said. "We are trying to be friends of all the Syrians, and not just some part of the Syrian people."

He said that Moscow will soon host two separate opposition delegations for talks.

The Syrian government sent troops backed by tanks into rebellious areas Monday, hunting down activists and torching their homes and bulldozing others, opposition groups said.

Activists said fierce clashes were taking place in the central region of Homs, after which rebels took control of the national hospital in the Jouret al-Shayah district. Human rights groups and the opposition have accused government forces of abusing and torturing wounded activists in the hospital in previous months.

The Local Coordination Committees and the British-based Syrian Observatory for Human Rights said rebels found around 70 unidentified bodies in the hospital refrigerators, apparently belonging to people killed in earlier fighting.

In the south, dozens of tanks surrounded the town of Dael early Monday before troops pushed in, shooting holes in rooftop water tanks and targeting dozens of activists' houses, torching some and bulldozing others, said local activist Adel al-Omari.

"They focused on the activists. They have their names and have been tracking them," al-Omari said, speaking by telephone from a garden in Dael where he was hiding. "They went in and spread fuel to totally burn them down."

Another activist, in the northern Idlib province, said government forces in the village of Haas also torched activist homes and killed seven people in one house, apparently because some were army defectors.

"The regime forces have pretty much stopped arresting people," Fadi al-Yassin said via Skype, adding that some people turn up dead soon after their arrest. "They either kill them right away or keep them for one day to get information and then kill them."

The Britain-based Syrian Observatory for Human Rights, which relies on an activist network in Syria, said at least 8 houses were burned in Haas and that two civilians and five rebel fighters were killed, among at least 24 killed nationwide.

The group also reported the destruction of at least three activist homes in Dael.

Activists also reported government shelling and machine gun fire in the central province of Homs, and the northern provinces of Idlib and Aleppo.

The activists' claims could not be independently verified. The Syrian government rarely comments on specific incidents and bars most media from working inside the country.