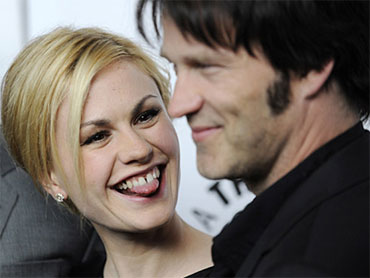 Ever since Latin superstar Ricky Martin has revealed that he's gay, more celebs are coming out of the closet, including actress Anna Paquin who publicly announced she's bisexual.

In a public service announcement for True Colors Fund's "Give a Damn," campaign, HBO's "True Blood" star, who is engaged to her onscreen love, Stephen Moyer, made the eyebrow-raising announcement.

Photos: Anna Paquin
Photos: Out in the Spotlight

The news came as a surprise to many, including, the organizers behind the True Colors Fund's "Give a Damn" campaign.

"I'm bisexual, and I give a damn," Paquin said in the PSA, which was taped Jan. 30, 2010. "One hate crime is committed approximately every hour of every day in this country."

According to RadarOnline, the Web site wegiveadamn.org, which features the PSA, crashed earlier today due to heavy traffic.

The mission of the non-profit's PSA is to address sexual discrimination and encourage people to work for the advancement of LGBT (lesbian, gay, bisexual and transgender) equality.

Other celebrities who have announced their bisexuality include, actress/singer Lindsay Lohan, who dated D.J. Samantha Ronson, and "Transfomers" star Megan Fox.