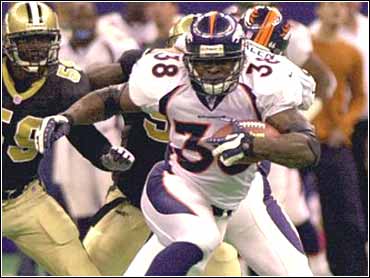 Going from third-string behind two 1,000-yard rushers to rookie of the year is a long shot. Then again, so is much of what Mike Anderson has achieved.

Anderson was selected Monday as The Associated Press Offensive Rookie of the Year in balloting by a nationwide panel of 50 sports writers and broadcasters who cover the NFL.

The halfback rushed for 1,500 yards and 15 touchdowns for the Denver Broncos after taking over for injured Terrell Davis and Olandis Gary.

"Oh, wow, I'm kind of speechless right now," Anderson said when informed he beat Baltimore running back Jamal Lewis in the balloting, 40 votes to 10. "That award, that just sums it up what kind of season it has been."

The postseason was much kinder to Lewis, who rushed for 110 yards on 30 carries Sunday as Baltimore beat Denver. Anderson was held to 40 yards on 15 carries by the Ravens' stingy defense. But the rookie voting just covers the regular season.

Last year's winner was Indianapolis running back Edgerrin James. Anderson is the first Broncos player to win the award.

Davis, like Anderson, was selected in the sixth round of the draft, although Anderson's college career at Utah was slightly more accomplished than Davis' at Georgia. And Gary, who replaced Davis in 1999 when Davis tore up his knee, was a fourth-round choice who gained 1,159 yards as a rookie. Anderson shattered that team record this season.

Anderson, 27, quit his high school football team during preseason drills his freshman year after a coach tried to convert him into an offensive lineman. Instead, he played drums and marched in the band in Fairfield, S.C.

After graduation, he spent four years in the Marines, where he took up football again. Then came two years of junior college and two years at Utah. He rushed for more than 1,000 yards all four seasons.

"I was going against some great competition, and guys who were much better known than I was," Anderson said. "They were being talked about before the draft and I wasn't even really mentioned. But that's OK, though, because it goes to show if you just dedicate yourself to something and you put a lot of hard work into it, it pays off in the end. It might not pay off when you want it to, but it will pay off eventually down the road. It looks like it's paying off for me now and for my teammates.

Anderson became the starter in Gam2 vs. Atlanta and ran for 187 yards against Oakland in the third game of the season.

He had 195 yards in a game against Seattle, then went for a rookie-record 251 and scored four times the next week at New Orleans. The Pro Football Hall of Fame requested Anderson's jersey from the Saints game.

In all, he started 12 games behind one of the league's premier lines, which he readily credited for his numbers.

"We do everything together as a team, on the offensive side of the ball," he said. "Pulling together and making it one unit, getting after it week in and week out."

Lewis had a major knee injury in 1998 at Tennessee, but the Ravens made him the first rookie taken in the draft, fifth overall, 184 spots ahead of Anderson. After a slow start, he came on strong, running for a Baltimore single-season record 1,364 yards in 13 starts.

"When you invest the fifth pick in a back, you have certain expectations," Ravens coach Brian Billick said. "There were things we saw in Jamal that I guess the rest of the world is now seeing: his size, his speed, his power, his ability to catch the ball out of the backfield."

Anderson looks forward to working with Davis and Gary in the future.

"If all three of us are healthy, that would be great for us as a team, as an organization," he said. "But you know, when you wake up every morning, you never know what life will offer you."