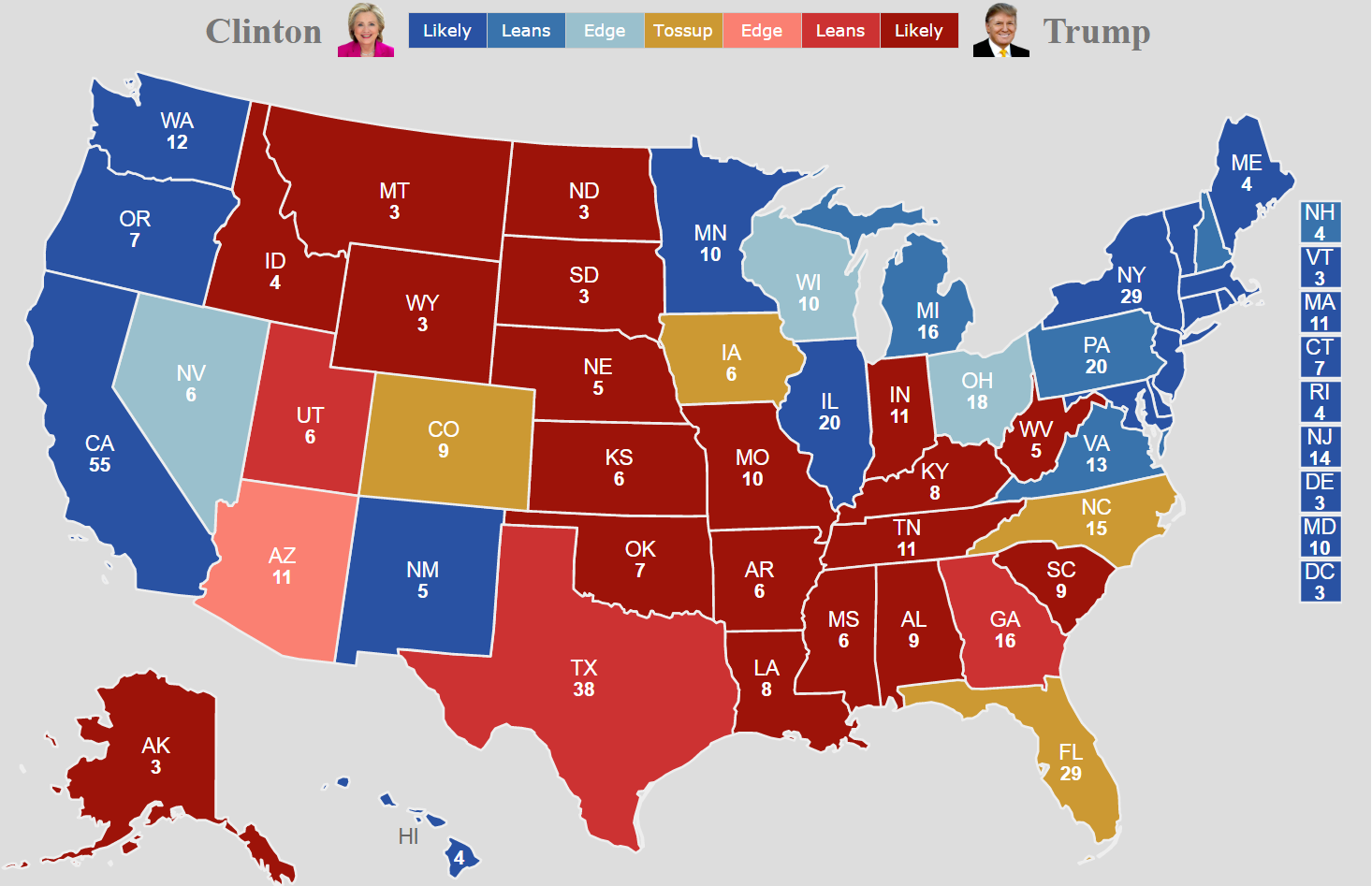 On Wednesday, with 13 days left until Election Day, Republican nominee Donald Trump spent his morning in…Washington, D.C., for the grand opening of his Trump Hotel.

The candidate then went on to a pair of campaign rallies in North Carolina later in the day, but his late-in-the-game stop in deep-blue D.C. raises an important issue: where the presidential candidates and their running mates have traveled.

“The Trump schedule has been different this cycle than most Republicans before him,” said Republican strategist Ryan Williams, who worked for Mitt Romney’s 2012 campaign. “And that’s because of, I think, some interesting priorities on behalf of the campaign and the realities they’re facing.”

It’s often said that the most valuable currency presidential candidates have isn’t their money—it’s their time. So, as they enter the final stretch before Election Day, how have Hillary Clinton and Donald Trump spent theirs?

A candidate’s schedule -- and the schedules on which they keep their top surrogates -- typically says a lot about the campaign’s strategy. It’s a source of insight into the states campaigns think are the most important and ones they think they’ve virtually won or have no shot of winning. And especially in the final weeks of a campaign, candidate visits to places outside the normal group of battleground states can point to vulnerabilities or unexpected strength.

CBS News has tracked the number of days the candidates and their running mates, Democrat Tim Kaine and Republican Mike Pence, have spent in each state since their respective party conventions -- the point in the campaign that is typically considered the formal start of the general election. (For Trump and Pence, that’s July 22; for Clinton and Kaine, it’s July 29.) Here’s what we found:

Mostly, the candidates have campaigned where one would expect them to: the vast majority of their appearances have been in states that are considered top battlegrounds this year.

And both campaigns, for the most part, tend to agree on what those top battlegrounds are. Take Florida, for example: as of Wednesday, Trump had spent part or all of 15 days in Florida, and Pence dropped in for four days. On the Democratic side, Clinton has spent eight days in the state, while Kaine has spent 10 days there. (Plus, this came before the convention, but Clinton announced Kaine as her running mate at an event in Miami.) The CBS News Battleground Tracker poll Sunday showed Clinton leading in Florida by three points, while a Bloomberg poll Wednesday said Trump leads Clinton by two.

Mo Elleithee, a former Clinton campaign staffer and DNC communications director who now runs the Georgetown Institute of Politics and Public Service, said there are three main factors that should drive a candidate’s travel schedule: talking to voters in battleground states, fundraising and media.

“What really drives [schedules], more than anything else, is maximizing the number of battleground state voters that you’re going to connect with,” Elleithee said. “The later you get in the campaign, the more important that becomes.”

There are some battleground states, however, where one campaign has put more time in than their opponents have. For example, Clinton and Kaine haven’t spent much time in Virginia: Clinton hasn’t been to Virginia since before the convention, while Kaine has taken four trips to the state that involved some sort of event (one of them being the vice-presidential debate in Farmville, Va.). That’s perhaps because Kaine, as a popular home-state senator and former governor, has helped put this state more in the Democrats’ column. By contrast, Trump has been in Virginia for part or all of eight days, while Pence has been there for part or all of 10 days.

Wisconsin, too, is a state that’s seen less attention from the Democratic ticket: Kaine has been there twice (and has another trip scheduled next week); Clinton has not been there at all during the general election. On the GOP side, Trump has spent four days in the state and Pence has spent two days there.

Both candidates and their running mates have spent time outside of the key battleground states -- but Trump has done so far more than his Democratic counterpart.

A rally in Fairfield, Ct., in mid-August? Yes, Trump spoke there, with his campaign aides saying the GOP businessman could put reliably Democratic Connecticut in play this fall. The last time Connecticut voted for a Republican in a presidential election was 1988. Trump has also held events in other predominantly Democratic states like Maryland and Washington—as well as deep-red states like Louisiana and Mississippi.

“These make no sense,” he said, noting that trips for a Republican to deep-blue states is a waste both of the candidate’s time and of the campaign resources required to put on big rallies. “I’m not sure if there was some sort of a fundraising trip that was supposed to accompany that, but it does not make sense for multiple reasons.”

Outside of the regular battleground states, a campaign’s stops can show places the campaign thinks they might be able to pick up additional ground—or, in the case of Pence’s visit to Utah on Wednesday, where the ticket might be falling behind and think  need to shore up their support (with independent candidate Evan McMullin making inroads there).

“Mike Pence is in Utah this week not for a good reason but for a bad reason,” Williams said. “They’re being forced to send their VP candidate and use up his time on a state that should never even be touched by the campaign in a general election, save fundraising.”

There are other states, too, that candidates and campaigns frequent for reasons besides campaign rallies: New York, California and D.C. have seen frequent visits from each of the candidates because they’re fundraising hot-spots or places where the candidates can do TV interviews or appear on popular shows.

Though the candidates themselves may not have spent a great deal of time in specific cities or states, that doesn’t mean they don’t have a presence there. The Clinton campaign in particular has a wide network of surrogates that’s constantly hitting the campaign trail on Clinton’s behalf—and often in different states than Clinton and Kaine are visiting on any given day, to give them maximum exposure.

For them, that starts with her family: former President Bill Clinton and her daughter Chelsea Clinton have both kept up a fairly busy schedule throughout the campaign. Clinton also has the star power of President Obama, First Lady Michelle Obama and Vice President Joe Biden, all of whom have been dispatched to key states to stump for Clinton. And Clinton has also made use of former primary rival Bernie Sanders and liberal icon Elizabeth Warren to shore up her support among the progressive wing of her party. There’s also a series of get-out-the-vote concerts and rallies the campaign is planning by stars like rapper Jay-Z (in Cleveland, Ohio) and Katy Perry (in Philadelphia and Las Vegas) in the final days of the campaign.

That’s especially true in states Clinton and Kaine have not visited themselves -- and in particular, places where the campaign may hope to make a late-breaking effort without putting too many resources there. Arizona is a prime example of that: Michelle Obama rallied supporters in Phoenix, Ariz., last Thursday, and Sanders held two early vote rallies in the state as well.

Trump, by contrast, has fewer surrogates out on the trail. His daughter Ivanka has held events on his behalf—including a series of “Coffee with Ivanka” events in Pennsylvania earlier this month. But there are few big-name Republicans hitting the road for him, no doubt a result of the fact that Trump has not won the strong support of much of the top-tier Republican establishment.

“In this case you have far more Clinton campaign surrogates hitting the trail than you do Trump campaign surrogates, at least that I’m seeing,” Elleithee said. “I don’t know whether that’s because there’s not as many folks who are willing to campaign for him or if it’s just bad strategy, but you want to cover as much ground as you can.”

Based on data collected by the CBS News political unit