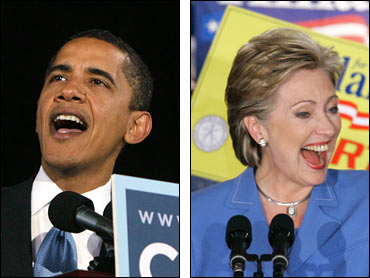 This analysis was written by the CBS News polling unit.

Jewish women over 45 were very solidly behind Clinton's candidacy, and she won among Jewish Democratic primary voters of all income and education levels. Still, Obama won the support of Jewish men under 65, and he also won among both men and women under 30, those who consider themselves very liberal, and those who view the war in Iraq as the country's most important problem.

Looking ahead, support for Clinton in the Democratic primaries may not indicate a problem for Obama in November among the country's Jewish voters. According to CBS News national polls conducted from February to May, Jewish registered voters overall would choose either Obama or Clinton over John McCain in the general election.

Obama won among Jewish men, but Jewish women voted in larger numbers, and they supported Clinton by a wider margin.

Nearly seven in 10 Jewish primary voters were self-described liberals - far more than Democratic primary voters overall - but just how liberal they considered themselves had large implications for their vote. Most Jewish voters who said they were very liberal - slightly more than a quarter - voted for Obama, while most of those who said they were somewhat liberal - 4 in 10 overall - voted for Clinton. Moderates also voted for Clinton.

LOOKING AHEAD TO THE GENERAL ELECTION

Although Jewish Democratic voters favored Clinton in the primaries, Jewish registered voters overall say they would support either Obama or Clinton in a November match-up with McCain. According to CBS News Polls conducted from February to May, both Obama and Clinton would win among Jewish voters nationally by a comfortable margin.

And Jewish registered voters have a more favorable opinion of Obama (61 percent) than they do of Clinton (51 percent), though both are viewed favorably.