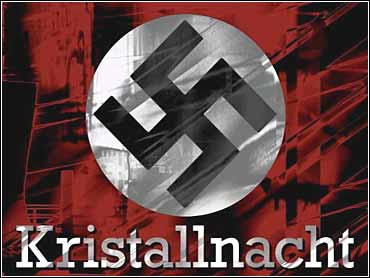 Germans must acknowledge that they looked away from Nazi crimes against the Jews and even benefited from the oppression, the president of parliament said Thursday on the anniversary of the infamous 1938 Kristallnacht pogrom, the loudest warning sign of the then-imminent Holocaust.

Wolfgang Thierse's remarks set the tone for a protest march against hate and anti-foreigner violence later Thursday, which was expected to draw thousands of ordinary Germans.

Flanked by leading German political figures and personalities, including tennis greats Boris Becker and Steffi Graf, Chancellor Gerhard Schroeder will lead the crowd on a march from prewar Berlin's main synagogue to the Brandenburg Gate.

German President Johannes Rau and Paul Spiegel, the leader of Germany's Jewish community, will be the main speakers at a rally that will conclude with Berlin's Staatskapelle orchestra playing Beethoven's Fifth Symphony, conducted by director Daniel Barenboim, an Argentinian-born Jew.

The national protest, one of many planned across Germany, is being billed as a focal point of the outrage against a rising wave of neo-Nazi hate crimes, the worst since a surge of violence just after German reunification in 1990.

The Nov. 9 anniversary is particularly poignant for Germans, recalling both Germany's painful Nazi past and one of its greatest triumphs, the fall of the Berlin Wall 11 years ago that made German reunification possible.

The Wall anniversary isn't getting as much attention this year in light of the neo-Nazi debate, revived by a still-unsolved bomb attack in the western city of Duesseldorf in July that injured 10 immigrants, six of them Jews. At least three people have died in hate attacks this year. Officials have warned that the neo-Nazi scene is becoming more violent and the number of reported anti-Semitic crimes are on the rise.

To fight the far-right menace, Germans must look to their own history, Thierse said.

"Only when we understand what happened and how it happened will we be in a position to draw on the lessons of our past," he told lawmakers at the Reichstag, drawing applause.

Thursday's march commemorating the Nov. 9, 1938, Kristallnacht pogrom, also known as the "Night of Broken Glass," starts from the golden-domed New Synagogue in the center of Berlin. That synagogue was saved from the destruction wreaked on Jewish houses of worship across the country by a police chief who kept Nazi thugs away. It was later damaged by Allied air attacks, and after a partial reconstruction, it reopened in 1995 as a museum.

"We say now at the beginning of the 21st century that we stand up for tolerance and humanity and are making a new Nov. 9 unlike all the others," the head of Berlin's Jewish community, Andreas Nachama, told Berlin's InfoRadio invoking the motto of the demonstration.

Politicians are also taking the fight against neo-Nazis from the streets into the courtroom.

The German Cabinet on Wednesday decided to pursue a ban in the country's highest court against the far-right National Democratic Party, which officials have accused of taking on Nazi-like characteristics. The upper house of parliament is expected to approve the ban proposal Friday.