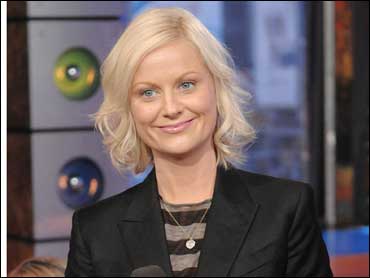 Amy Poehler is busy as a bee this weekend, and her alter ego, Bessie Higgenbottom, couldn't be happier.

On Friday, her new film, "Baby Mama," made its theatrical debut. On Saturday, Poehler goes from being hired to have a kid to being a kid in her new cartoon show "The Mighty B."

"I'm going to go to bed and stay in my pajamas until 10:30 a.m. and watch 'Mighty B,"' Poehler said of her post-movie celebration plans.

The show, making its debut on the Nickelodeon cable network, was co-created by Poehler and stars her as 9-and-3/4-year-old Bessie, the most obsessive member of her Girl Scout-like troop, the Honeybees.

She wears her uniform everywhere and has amassed thousands of merit badges for everything from entering a stray dog in a high-end pet show to riding a roller coaster she's too short to get on.

In real life Poehler was a Brownie, although not nearly as successful as Bessie.

"I think I made like a pencil holder and I went to a steakhouse restaurant. That's all I can remember," she said during a recent phone interview from her New York City home.

Bessie, with her adenoidal voice, is based on a character the 36-year-old "Saturday Night Live" star used to do on Comedy Central's "Upright Citizens Brigade."

Putting her in a cartoon show gives Poehler a chance to relive a bit of her childhood.

"Although I was not as hard working as Bessie, I certainly was as bossy," she laughed.