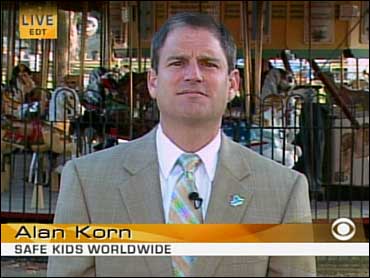 The death of a 12-year-old boy at Disney World in Orlando this week has focused renewed attention on amusement park safety, heading into the holiday weekend.

Michael Russell of Fort Campbell, Ky., had ridden the Rock 'n' Roller Coaster with his parents and 7-year-old brother.

Florida officials say he is the ninth person to die at Disney World since 2003. At least 16 people have died at Disney's two theme parks in Florida and California since 1989.

"No one ever expects to end a day at an amusement park in an emergency room or, worse yet, a death," says Alan Korn, director of public safety at Safe Kids Worldwide,. "And, thankfully, these are very, very, very rare. There's about four deaths a year associated with amusement parks and, given the huge number of people who go on these rides, that's a relatively low number.

"But you don't throw caution to the wind. There are still some things that you can do to make sure you have a safe time in the park."

The Safe Kids Worldwide Web site described it as "a global network of organizations whose mission is to prevent accidental childhood injury, a leading killer of children 14 and under."

In a chat with o-anchor Hannah Storm on The Early Show Friday, Korn had several tips for parents brining kids for what's supposed to be a day of fun at theme parks and fairs:

"Those are very important," Korn said. "And what people don't realize is that those are minimum requirements. Just because a child meets the height requirement, doesn't mean they've got the cognitive capability or they're mature enough to handle the ride. That's to provide some good guidance. Certainly, if you're lower than that height level, you do not get on the ride. If you're higher, then there's an extra little bit of analysis parents should do to make sure the child's appropriate for any particular ride."

"Read the signs," Korn urged. "And (don't) get (so) excited about the ride (that) you forget about the instructions that the amusement park people are telling you. They'll know best how to have a safe ride. You want to make sure you follow those rules when you're on the ride itself, and don't play around and goof off on the ride. You want to make sure you have a nice safe experience.

"A lot of kids can get a little anxious about a ride," Korn pointed out, "so, it's a good idea to take a look at the ride, watch the patrons come off the ride, watch it go around track, no matter what it is.

"It's there for a reason," Korn observed. "Just like in a car, there's safety restraints. These (rides) throw you around, sometimes violently. It's part of the thrill of the ride. That's why they call them thrill attractions. So make sure, by all means, use the restraints and follow the guidelines and rules going up to the ride, and once you're on the ride."