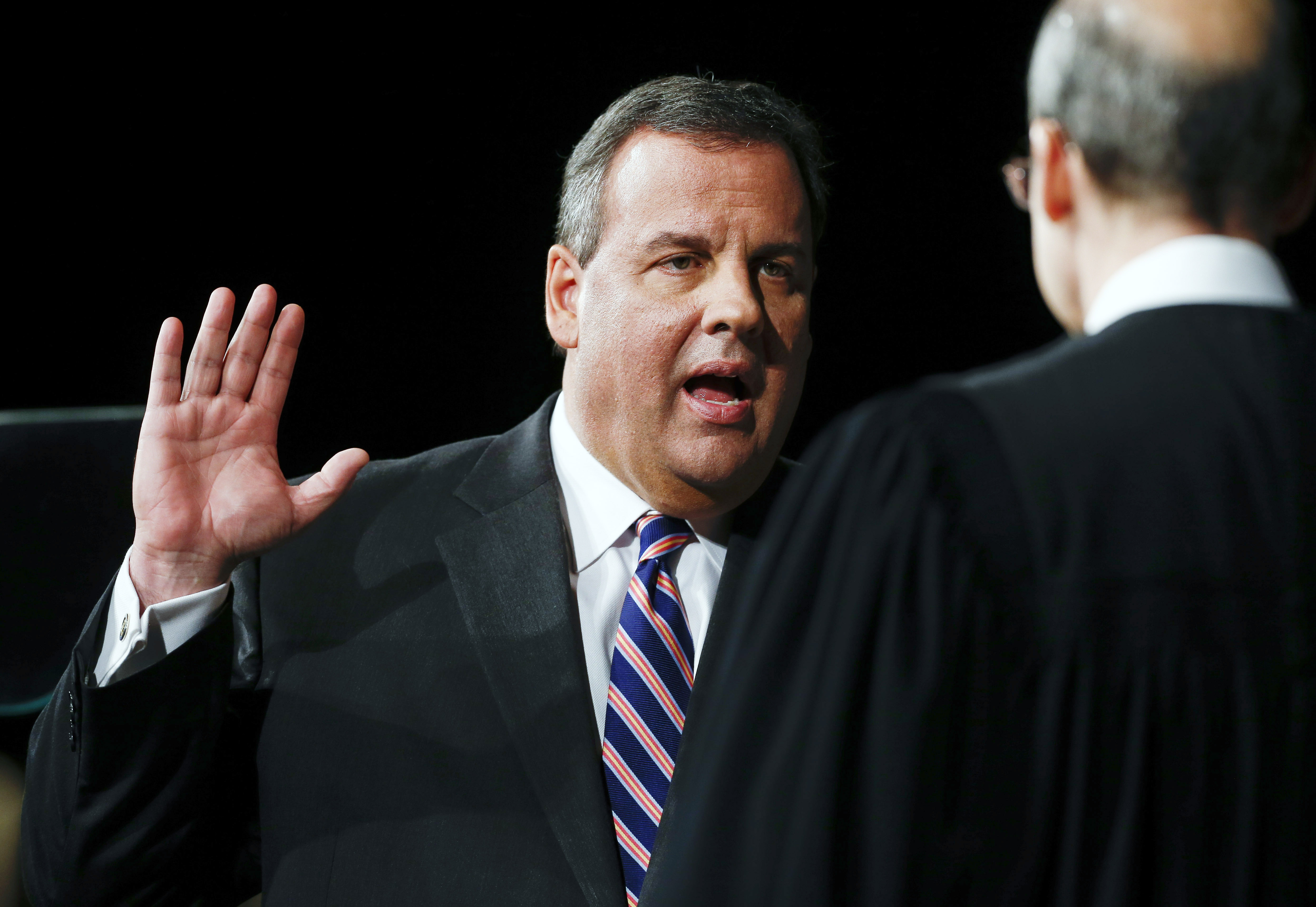 Updated 12:43 p.m. ET
Gov. Chris Christie, R-N.J., was sworn in for a second term Tuesday in a pomp-filled celebration that all but ignored the scandals that threaten to derail his political career.
Christie took the oath of office in Trenton, N.J., during an indoor inauguration ceremony in the capital city's war memorial that was shielded from the snow falling outside. The storm forced organizers to cancel an inauguration party planned for Tuesday evening at Ellis Island.
During his 19-minute inauguration address, Christie focused on New Jersey's recovery from a weak economy and from Superstorm Sandy, two issues that dominate his first-term legacy.
"We have endured the worst economic recession of our lifetimes and we have begun to triumph over it," Christie said. "...We have survived the worst natural disaster in our state's history and worked together to restore, renew and rebuild the state we love."

He also spent a large chunk of his speech chastising Washington politics and promoting bipartisanship.

But it was his message of setting aside political differences that raised eyebrows.

Christie's world has been turned upside down in the 11 weeks since Election Day. He romped to re-election in November and boosted his brand of a moderate with cross-party appeal. Today, he is in the center of multiple investigations as controversies unravel across the state. He is accused of abusing his power by using the George Washington Bridge and Sandy relief funds as tools for political retribution.

The latest allegation comes from Dawn Zimmer, the Democratic mayor of Hoboken, N.J., a city that was ravaged by Superstorm Sandy in 2012. She claims the Christie administration blocked millions of dollars in storm relief funds because she did not approve a business development plan favored by the governor and his allies - and that the threat was delivered personally by Lt. Gov. Kim Guadagno, R-N.J., during a joint appearance in May.

Guadagno, who was sworn in for her second term Tuesday shortly after Christie, eviscerated Zimmer at a press conference Monday and vehemently denied the claims as both "illogical" and "false."

In his inauguration speech, Christie touted his broad electoral coalition and struck a compassionate tone at times. The governor is considered a likely presidential candidate in 2016 and he could use these qualities to convince Republican primary voters that he is electable and cares about people's problems.

Still, the controversies are already taking a toll on Christie's public image. He still has a positive net favorability rating, but the number of people who view him in a negative light has doubled since this time last year, according to a poll released Monday by the Pew Research Center. Furthermore, 58 percent of people familiar with the bridge scandal say they don't believe Christie's claim that he was not involved in the scheme to create traffic problems in Fort Lee, N.J., by arbitrarily shutting down lanes.