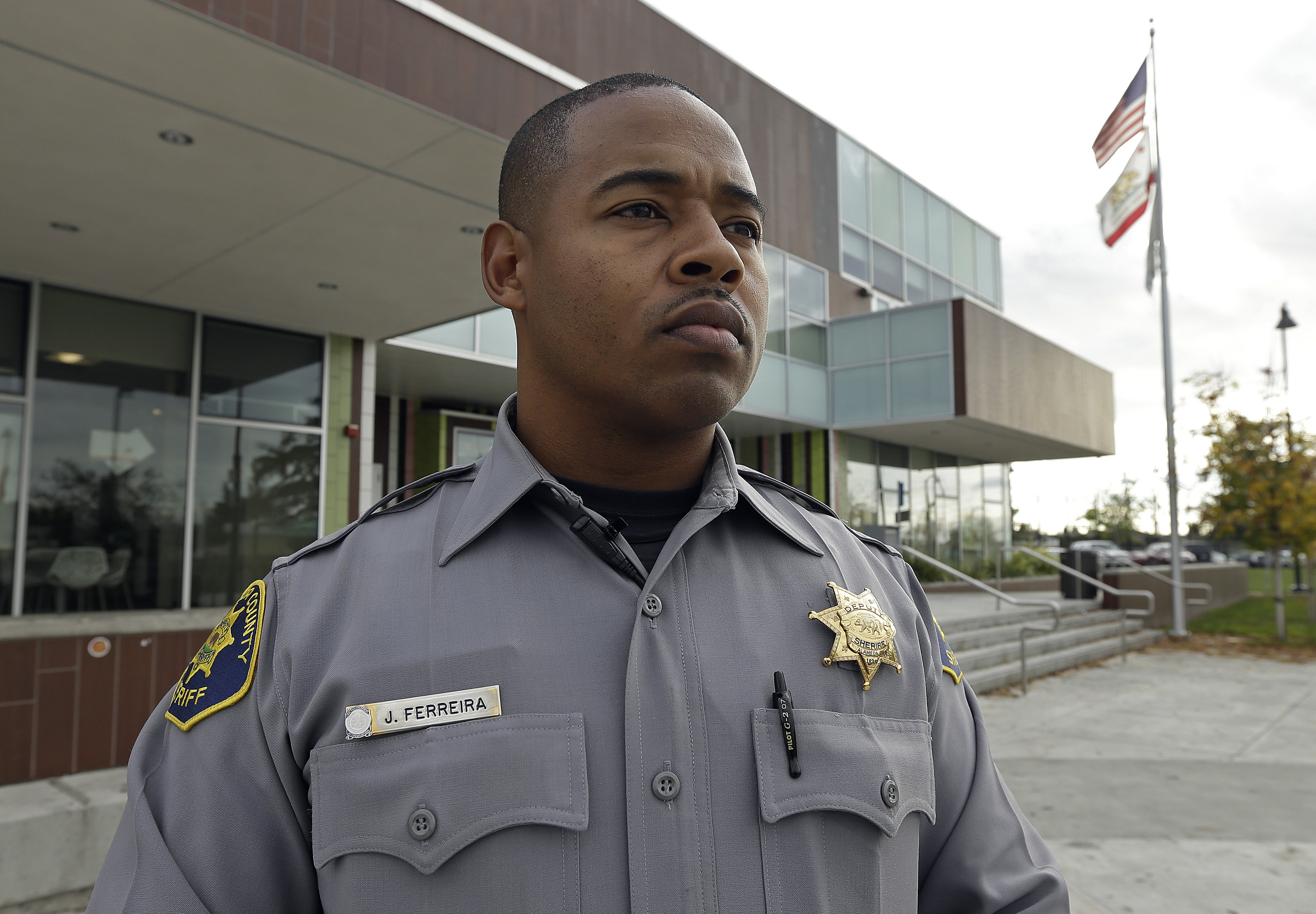 Jorge "Jinho" Ferreira feels the tension between being black and carrying a badge every day as a sheriff's deputy in Alameda County, California.

With the nation roiled by two grand juries' recent decisions not to indict white police officers in the deaths of unarmed black men, some black officers say that as they enforce the law, they also wonder whether the system they're sworn to uphold is stacked against black men.

In interviews conducted by Associated Press reporters across the nation, retired and active black officers expressed concern about how black men are treated by the largely white police forces in the United States, an issue that has led to protests alleging police brutality.

The officers say they want change just as much as anyone else, and advocate for it where they can because they, too, have something to lose.

"A lot of us have sons, and we want to make sure our colleagues are treating our young boys with dignity and respect," said Oakland Police Lt. LeRonne Armstrong, a 16-year veteran.

Since the summertime deaths of 18-year-old Michael Brown in Ferguson, Missouri, and Eric Garner, 43, who gasped "I can't breathe" while being arrested for allegedly selling loose, untaxed cigarettes in New York, thousands of people have taken to the streets to protest their deaths, the grand juries' decisions - and the nation's police forces.

Caught in the middle are blacks working in law enforcement. There were an estimated 55,267 African-Americans in local police departments and an additional 15,500 in sheriff's departments in 2007, the latest information available from the Justice Department.

"We're called things like Uncle Toms and traitors to our community, in spite of the fact that we sympathize or we agree with the anger that our community holds, because we feel that same anger," said Noel Leader, a retired New York City police sergeant who in 1995 co-founded an advocacy group, 100 Blacks In Law Enforcement Who Care.

Black officers point out that they contend with many of the same racial issues as black civilians, such as stereotypes, racism on the job and even confrontations with the police. Black plainclothes or undercover police officers have been shot by their white counterparts, as in the 2009 death of NYPD Officer Omar J. Edwards, who was killed while he was chasing a man who had broken into his car.

"I understand that when I am given directions from the police, I am very cautious and careful to comply with their demands or commands until it could be understood what is really going on," said Michael Williams, a 15-year veteran and president of the police union Memphis Police Association. "We have to take responsibility for our actions, even in the black community, and we can avoid a whole lot of this."

Kevin A. Minor, a St. Louis County Police recruitment officer and field training officer, remembers being followed around a discount store by a security officer while trying to shop. "If that's what makes him feel like he's doing his job, oh well," Minor said. "Because I know why I'm there, and I'm going to leave there with what I'm going to buy and that's it."

Task forces and commissions around the nation are being formed to study ways to improve relations between police forces and minorities. Three high-ranking House Democrats on Tuesday pressed for congressional hearings on police tactics and race, and President Barack Obama told Black Entertainment Television, in an interview aired Monday, that a variety of factors, from training to subconscious racial fears, have combined to create "a national problem that's going to require a national solution."

While acknowledging the rage felt by communities that feel persecuted by the police, some of the black officers were not quick to blame race for some of the deadly encounters.

Ferreira says he felt inspired to become a law enforcement officer after attending a rally decrying Oscar Grant's shooting death at the hands of a white transit police officer in Oakland 2009. But he also says there often is nothing racial about how officers operate.

"There are two people involved that decide the outcome: It's the cop and the suspect," Ferreira said. "Both of them contribute to the outcome of the interaction. It's not going to be the color of one's skin."

Black officers say they can help quell some of the hostility between police and the communities they patrol. "I think law enforcement leaders have to recognize that minority officers can be that bridge to build trust because they understand where the mistrust comes from," Armstrong said.