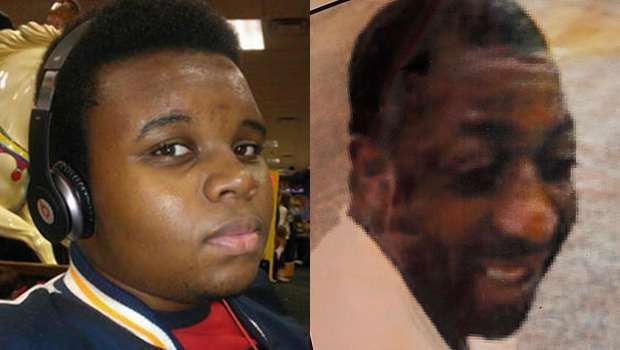 Blacks and whites also hold different views on the police use of deadly force. Eighty-four percent of blacks say police are most likely to use deadly force against blacks, while most whites say race is not a factor.

More than four in five blacks are disappointed or angry about the lack of an indictment in the deaths of Michael Brown and Eric Garner. Blacks are much more likely than whites to think race played a major role in the deaths of both men.

Police: Use of Force and Race

Whites and blacks also hold different views on the role race plays in the use of deadly force by the police. 84 percent of African-Americans think the police in most communities are more likely to use deadly force against a black person than a white person, while a majority of whites - 57 percent - think race is not a factor.

This racial divide persists on the broader question of whether police, in general, are too quick to use deadly force.

The deaths of Michael Brown and Eric Garner

Most Americans have heard or read a lot about a grand jury's decision not to indict police officer Darren Wilson in the shooting death of Michael Brown in Ferguson, Missouri, but they are divided on how they feel about it. While 45 percent of Americans say they are either pleased (19 percent) or satisfied with the decision (26 percent), nearly as many - 41 percent - say they are either disappointed (28 percent) or angry (13 percent).

Blacks and whites see things differently. Fifty-one percent of whites are at least satisfied with the decision, while 82 percent of blacks say they are disappointed (55 percent) or angry (27 percent).

Fewer Americans (39 percent) have heard or read a lot about another grand jury decision not to indict police officer Daniel Pantaleo in the death of Eric Garner in Staten Island, NY, though they are much more critical of the grand jury's decision in this case. Fifty-four percent of Americans are either disappointed (35 percent) or angry (19 percent) with the lack of an indictment. Among blacks, 87 percent are disappointed (51 percent) or angry (36 percent).

Just 14 percent of whites and even fewer blacks (3 percent) think the use of force by police that brought about Garner's death was justified. Two-thirds of blacks (68 percent) think it was not justified, while many whites (46 percent) don't know enough to say.

Many Americans think race played a role in the deaths of both men, both of whom were black and the police officers involved were white. But blacks are far more likely to think it played a major role. Whites are more likely to say race was not a factor.

In the aftermath of the grand jury decisions in the Brown and Garner cases, 49 percent of Americans think an independent prosecutor should handle cases involving police and civilian deaths, while 39 percent think local district attorneys should handle them. A majority of African Americans think these cases should be handled by an independent prosecutor.

Majorities of Americans, including both blacks and whites, think police officers stop people of certain racial or ethnic groups because they think they are more likely than other groups to commit crimes.

In order to help ease tensions and disputes between police and civilians, some have proposed better training of police and police use of body cams. The poll finds broad support for both of these approaches, including majorities of both blacks and whites.

In addition to more training and body cameras, half of Americans think a police department that reflects the racial make-up of its community is a good idea. Most blacks - 63 percent - think this should be the case, but whites are divided.

There is public opposition to local police forces having military-style armored vehicles and assault weapons - similar to the kind of equipment that was used by police in Ferguson Missouri in August, with 65 percent of Americans overall opposing the arming of their local police with military weapons and vehicles.

Race Relations in the U.S.

Americans divide in their assessments of race relations in the U.S: 45 percent think they are generally good, but 43 percent think they are generally bad. Views are similar to August - when protests in Ferguson first began after Michael Brown's death - but the percentage who says race relations are good has dropped 10 points since the spring and is now the lowest in CBS News Polls since 1997.

Blacks are more critical than whites. Fifty-four percent of blacks think race relations are bad, while whites are more divided.

Only one in five Americans thinks race relations are improving in the U.S. Most either think they are getting worse (36 percent) or staying about the same (40 percent).

This poll was conducted by telephone December 6-9, 2014 among 1,122 adults nationwide. Data collection was conducted on behalf of CBS News and the New York Times by SSRS of Media, PA. Phone numbers were dialed from samples of both standard land-line and cell phones.