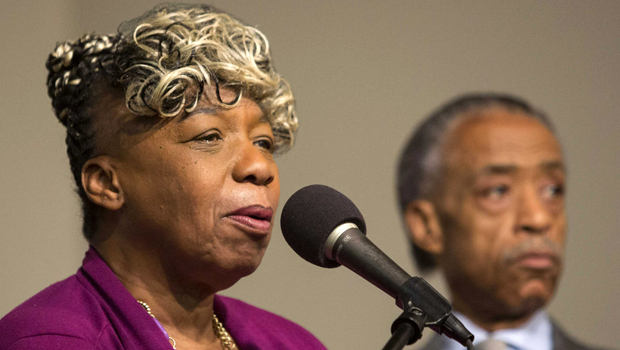 NEW YORK -- The mother and widow of the unarmed black man whose chokehold death sparked protests across the country said Saturday they've been moved by the thousands of peaceful demonstrators who have taken to the streets after a New York City grand jury declined to indict the white officer involved.

"It is just so awesome to see how the crowds are out there," said Eric Garner's mother, Gwen Carr, who said she herself was stuck in her car after protests shut down traffic.

"I was just so proud of that crowd," Carr said. "It just warmed my heart."

Garner's widow, Esaw Garner, said she saw demonstrators from her apartment window and told her son, "Look at all the love that your father's getting."

CBS News correspondent Jericka Duncan reports that Garner's last words - "I can't breathe" - represent a call for justice from thousands across the country.

For the past three nights, demonstrators have shut down major highways in multiple cities. In Denver, students walked out of schools. One sign read, "They can't kill us all."

Police said 20 protesters were arrested on disorderly conduct charges in New York Friday night. Hundreds of protesters marched and many briefly laid down in Macy's flagship store, Grand Central Terminal and an Apple store. They streamed along Fifth Avenue sidewalks and other parts of Manhattan, with signs and chants of "Black lives matter" and "I can't breathe."

In Oakland, California, hundreds of protesters briefly blocked Interstate 880, a major freeway, on Friday night. There were no immediate reports of any arrests or injuries.

Protests have also been held in Philadelphia, Chicago, Miami and a number of other cities.

Sharpton is planning a march in Washington D.C., next Saturday to protest deaths at the hands of police, including those of Garner and Brown.