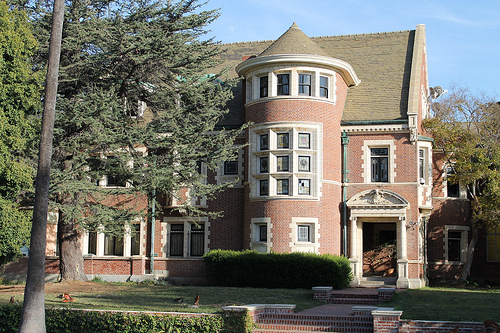 Most people would not choose to live in a haunted house, but this scary estate is another story altogether. The home from the hit show "American Horror Story" might be haunted on the show, but in real life the gorgeous 1930s mansion is the perfect blend of creepy character and old-world charm.

"American Horror Story" centers on a creepy house which has been the scene of countless violent deaths over the years. Unaware of its supernatural past and ghostly inhabitants, a family of three moves into the restored mansion looking for a fresh start. Instead, they find themselves face to face with the restless spirits that patrol the property.

The Los Angeles home is more than the main character in a hit TV show: The striking three-story home is also known as the Alfred F. Rosenheim Mansion, named for its famed architect. Rosenheim designed and built the historic estate in the early 1900s as a single family home and it eventually became a convent. The pilot episode for "American Horror Story" was shot on location at the house, while the rest of the series is filmed on sets that are exact replicas of the mansion.

According to the Daily Mail, the 10,440 square-foot, six-bedroom mansion can be yours for a bargain price of $4.5 million. That's assuming you're interested in purchasing a spooky property that isn't really haunted.

The main foyer features an elegant wooden staircase with a handy nook for candelabras, perfect for recreating the eerie atmosphere that makes the show so popular. There's also a grand ballroom - the ideal spot for hosting scary Halloween house parties.

While there is no mention of ghosts in the listing, the house is described as a "one-of-a-kind residence that evokes the quality and grandeur of a bygone era." With all the opulent amenities, it's easy to see why this house of horrors is a Hollywood landmark.

For a look inside the home, check out this YouTube video of the Alfred F. Rosenheim Mansion.