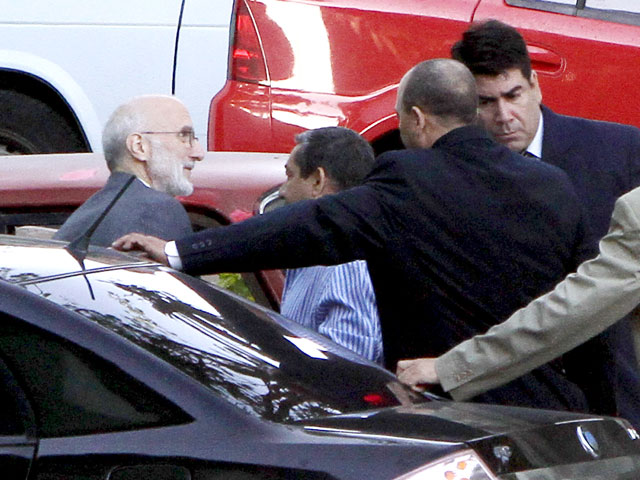 HAVANA - A Cuban court on Saturday found U.S. contractor Alan Gross guilty of crimes against the state and sentenced him to 15 years in prison, a verdict that is sure to have sweeping repercussions for already-sour relations between Washington and Havana.

The court said prosecutors had proved their case that Gross, 61, was working on a "subversive" program paid for by the United States that aimed to bring down Cuba's revolutionary system. Prosecutors had sought a 20-year jail term.

CBS News' Portia Siegelbaum reports from Havana that the sentencing does not put this case to bed, as Cuban law provides for appeals.

This sentencing comes at a time when Cuba is emptying its jails of all political prisoners and prisoners condemned for terrorism and crimes against State security, even when they involved violence. So there may be a humanitarian release in the not too distant future. Also, unlike the statements from the U.S. Government, Gross's attorney is portraying the U.S. contractor not as a humanitarian unjustly imprisoned but as a pawn caught up in the five decade long feud between Washington and Havana.

Two recent Cuban TV programs focused on U.S. efforts to undermine the Castro regime, including by smuggling in technology to set up what they described as equipment for use in establishing internet networks that could escape the control of local authorities. A third program has been announced as "coming soon" and some observers think it will deal more specifically with the Alan Gross case and that it hadn't been aired yet because they were awaiting the verdict.

The Maryland native was arrested in December 2009 while on a USAID-backed democracy-building project. The U.S. government and Gross's family say he was working to improve Internet access for the island's Jewish community, did nothing wrong, and should be released.

Cuban officials have called him a mercenary and maintained his motives were more nefarious. The court said the program that Gross worked on - part of a $20 million Washington-effort to support democracy on the island - showed that the U.S. government continues to seek the overthrow of a Cuban government ruled since 1959 by brothers Fidel and Raul Castro.

The Havana court found the evidence presented at the trial "demonstrated the participation of the North American contractor in a subversive project of the U.S. government that aimed to destroy the Revolution through the use of communications systems out of the control of authorities," according to a statement read out on the afternoon news.

It said that during testimony in the two-day trial, Gross "recognized having been used and manipulated" by his company - Bethesda, Maryland-based Development Alternatives, Inc. - as well as by USAID and the State Department. It said he has the right to appeal the sentence to the Supreme People's Tribunal, Cuba's equivalent of the U.S. Supreme Court.

Development Alternatives was awarded a multimillion-dollar contract for the program in which Gross was involved, and Gross received more than a half million dollars through his company, despite the fact he spoke little Spanish and had no history of working in Cuba. Gross traveled to the island several times over a short period on a tourist visa, apparently raising Cuban suspicions.

The USAID programs have been criticized repeatedly in congressional reports as being wasteful and ineffective, and funding was held up briefly in 2010 over concerns following Gross' arrest. The money has begun flowing again, though U.S. officials say Development Alternatives is no longer part of the program.

While the verdict was not unexpected, it is sure to have a chilling impact on relations. U.S. officials have said repeatedly that no rapprochement is possible while Gross remains jailed.

In a statement, Peter J. Kahn, lawyer to Gross, said:

"The Gross family is devastated by the verdict and harsh sentence announced today by the Cuban authorities. Having already served a 15-month sentence in a Cuban prison, Alan and his family have paid an enormous personal price in the long-standing political feud between Cuba and the United States. We will continue to work with Alan's Cuban attorney in exploring any and all options available to him, including the possibility of an appeal. During this most difficult time for Alan and his family, we again call on the Cuban government to release him immediately on humanitarian grounds."

National Security Council Spokesman Tommy Vietor said, "Today's sentencing adds another injustice to Alan Gross's ordeal. He has already spent too many days in detention and should not spend one more. We urge the immediate release of Mr. Gross so that he can return home to his wife and family."

In testimony before Congress on Thursday, U.S. Secretary of State Hillary Rodham Clinton called on Cuba to free the American.

"We deplore the injustice toward Alan Gross," Clinton said. "We want him home."

Gloria Berbena, a spokeswoman for the U.S. diplomatic mission on the island, told The Associated Press that American diplomats had not been notified officially of the court's decision and were still trying to verify it. Several people close to the case had said earlier the court would notify Gross's Cuban lawyer, who would in turn tell her client and American officials. It was not clear if she was informed before the verdict was read out on the news.

There was no immediate reaction from Gross's family.

Now that he has been convicted, his backers will try to get him released through a court action or executive pardon, possibly on humanitarian grounds. His wife Judy says Gross has lost more than 90 pounds since his arrest, and that his 26-year-old daughter and 88-year-old mother are both suffering from cancer.

Supporters, from the Rev. Jesse Jackson, to U.S. Jewish groups, have already made impassioned pleas to Cuban President Raul Castro to free Gross. Jackson offered to fly to Havana personally to mediate, reprising a role he has played previously in Cuba and elsewhere.

Several Cuba experts have said Havana hoped to use Gross's case to shine a light on the democracy-building programs. Now that he has been convicted, they argue, Cuba has no strategic reason to keep him in prison much longer.

However, such a process could take weeks or months to play out, if it happens at all.

The court is made up of a five-judge panel, including three professional judges and two citizens trained to hear cases and empanelled for a month. A simple majority is enough to convict. The newscast did not say whether the decision was unanimous.