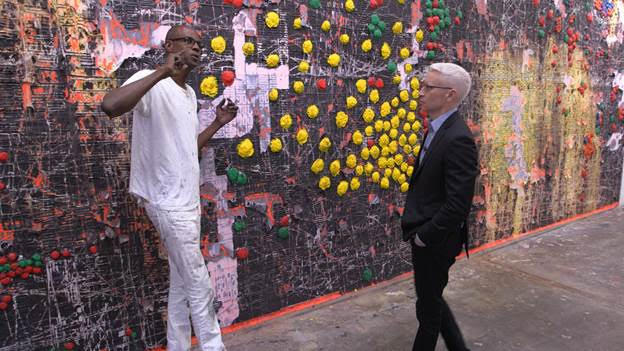 Mark Bradford's art looks like painting, but there's hardly any paint. He often begins with an image representing a moment in history and adds layers and layers of paper fabricated in ways only he can imagine – layers he considers history that he may then dig into by gouging, ripping or power washing it in his own unique revision. It's his way of digging into history or into himself he tells Anderson Cooper. Cooper profiles the artist for a "60 Minutes" story, Sunday, May 12 at 7:00 p.m., ET/PT on CBS.

Bradford has emerged as one of America's premier artists, his works commanding millions and landing on the walls of major museums around the world. Cooper himself owns one. The process of creating his art and its relationship to history is like archeology he says. "I'm creating my own archaeological… digs. Sometimes when I'm digging on my own painting I'm asking myself, 'Well, exactly what are you digging for? Where do you want to go child?'"

The effect for Bradford and the effect he hopes audiences feel, too, is revision; he's making his mark on history. "I don't really believe history's ever fully accurate," he tells Cooper.

Acclaimed newspapers all around the country shutting their presses
Thanks for reading CBS NEWS.
Create your free account or log in
for more features.
View CBS News In
CBS News App Open
Chrome Safari Continue
Be the first to know
Get browser notifications for breaking news, live events, and exclusive reporting.