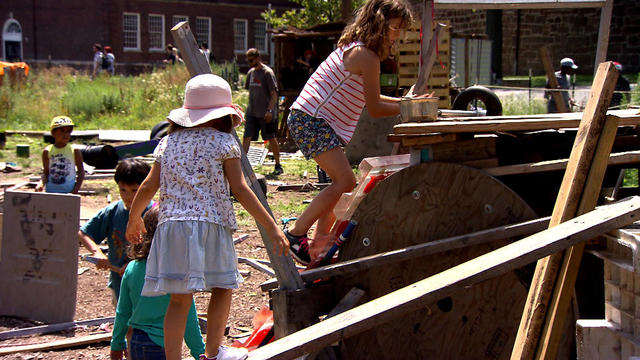 For decades, special playgrounds in the U.K. have given children free rein. Now, the concept of "adventure play" is slowly spreading in the U.S., but these playgrounds, which look more like junk yards, will require new thinking about what play and childhood are supposed to look like.

While some kids hammered and others sawed, 11-year-old Jonah Schwarz started building an addition to the playground fort.

"And there's a sign that says, 'Kids do not need advice or suggestions,' so I could just basically do whatever I want," Jonah said.

This is play:groundNYC -- 50,000 square feet of dirt where the boundaries of childhood have been redrawn.

"This is a space where children can make their own decisions about what is quote unquote 'risky,'" Rebecca Faulkner said.

Faulkner opened the non-profit adventure playground last summer, joining a tiny handful of spaces in the U.S. that give kids dangerous tools and invite them to make a mess.

Adventure playgrounds first blossomed in the U.K. after World War II thanks to a woman named Marjory Allen. She turned London bomb sites into places kids could do pretty much whatever they wanted.

One of those was Glamis, which is still open in East London.

"Do what you want, it's a free place. You just have loads of fun. You can't do anything that they'll say, 'No, you can't do it,' you're just free," said 10-year-old Millah Callender.

How free? Well, after taking a sledgehammer to wood pallets, kids stacked the broken boards and set them on fire. If that sounds a bit dangerous, the workers there, like Penny Wilson, say that's the point.

"I think the risk is definitely a positive. Children are doing things that children are perfectly capable of but we as adults decide that they're not because we feel uncomfortable with it," Wilson said.

But even in London, that argument has faced pushback and adventure playgrounds have been changing, or even closing, in part over safety concerns.

In the U.S., 61 pages of federal playground guidelines now warn against everything from grass to rope swings. That's why Playground: NYC isn't actually in New York City, but on Governor's Island, a former military base just south of Manhattan.

"Governor's Island is unique in that there are different rules here that don't apply to the city," Faulkner said.

Even here, there are signs America may not be ready for a London-style adventure playground.

Parents here are required to sign a legal release – not the case in the U.K. – and unlike London, adults are not allowed inside.

"Yeah, parents here lean against the fence and tell the kids what to do and how, as though they're not innately capable of that already," Sutton said.

Faulkner says the parents aren't kept out just for the children's sake, but as part of an effort to retrain the parents to leave their kids alone.

Embracing the freedom of adventure play may be easy in theory, but what happens when someone steps on a nail? When it happened to Adison Bloch, her mom let her other daughter keep playing.

"We went in knowing that it's a place they can get hurt but, you know, it's the type of experience that kids in the city don't always get and I think that's great," Jill Bloch said. She said she would "absolutely" bring her kids back.

"Play work is on a human level, it's a direct challenge to the dominant paradigm of childhood, that being, that children are weak, that children are incapable, that children need to be protected and held and sheltered from the fears and dangers of the world. But if that were true, then we as a species would've gone extinct long ago," Sutton said.

Sutton said he blamed himself for Adison stepping on a nail. He says there's a difference between risks and hazards and it's his job to eliminate hazards like a nail hidden in the dirt. But risks, like swinging a hammer or standing high above the ground, those are things kids need to conquer themselves.