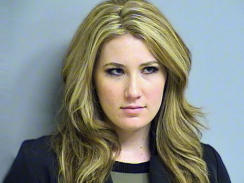 The jury reached a verdict after about two-and-a-half hours of deliberation and recommended a sentence of 25 years in prison.

Hilberling, who was 19 and pregnant at the time of her husband's death, has maintained she pushed 23-year-old Joshua Hilberling in self-defense. She said she didn't intend for him to fall through the window and argued that the glass in the apartment window was dangerously thin.

Earlier this month, Hilberling turned down a plea deal from prosecutors that would have sent her to prison for only five years, the station reports.

Attorneys for both sides said the whole case came down to the push she gave her husband and whether it was legal or not.

Prosecutors told the jury the evidence did not support Hilberling's claim of self-defense and there were no signs of struggle in the apartment. They argued that she caught her husband unaware, ran toward him, and pushed him from the side or back, which is not self-defense.

The defense said there was plenty of evidence to support the self-defense claim, including fingerprint marks and a scratch on Amber Hilberling's shoulders, where she said her husband grabbed her right before she pushed him off of her.

"She has a really good heart. She just feels terribly about what happened. She loved her husband...," April Seibert, Amber's attorney said.

According to the station, the prosecutor agreed that Hilberling probably didn't intend to kill her husband, but said that it didn't matter; what mattered was that her actions caused his death.

Hilberling will remain in jail with no bond until she is sentenced on April 23. She faces up to life in prison. According to KOTV, she is already planning to appeal the conviction.