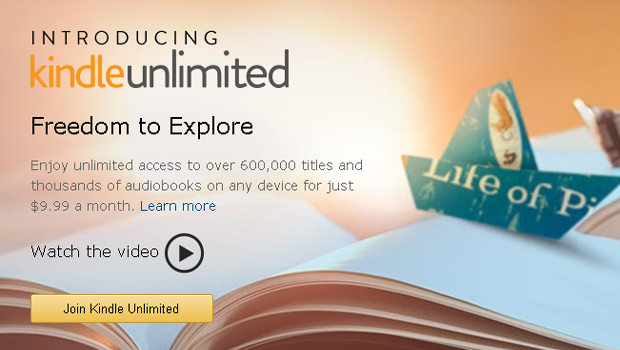 Amazon, now an Internet retail and media giant, has never forgotten its roots as an online bookseller -- even though many of those books are now digital. Now it may be considering a new service for its most voracious readers.

According to a new report by Gigaom, the e-commerce retailer may be testing a program called Kindle Unlimited, which would offer unlimited access to Prime books and audiobooks for $9.99 a month. Test pages for Kindle Unlimited were found by users enrolled in Amazon's Kindle Direct Publishing program, before being taken down (a cached version still exists).

Users on the Kindle boards noted that the 600,000 titles available were either published through Amazon or already available through the Kindle Owners' Lending Library, which allows Amazon Prime members to borrow bestsellers for 30 days. None of the five major publishing companies, including Simon & Schuster and HarperCollins, appeared to be participating, according to Gigaom. (Simon & Schuster is owned by CBS Corp., the parent company of CBS News.)

Kindle Unlimited, if launched, would directly compete with Oyster, a similar ebook service that allows unlimited access to over 500,000 books for $9.95 a month, and Scribd, which has 400,000 titles, including bestsellers and original works.

The launch of Kindle Unlimited would also mark a change in the company's strategy. It would be a standalone service that is not tethered to Amazon Prime's $99 annual subscription, notes Gigaom. The only similar service service that is not linked to Amazon Prime is Kindle FreeTime Unlimited, which offers a selection of hand-picked titles of games, videos and books for children and parents. It is also only available for users with Kindle Fire tablets.

Amazon did not reply to CBS News' requests for comment at the time of publishing.