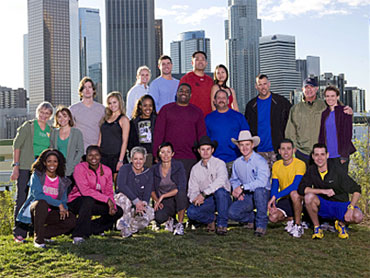 Jeff and Jordan, known as the "Big Brother" couple, were eliminated from "The Amazing Race Sunday, but not before the teams managed to shatter hundreds of champagne goblets, trying to fill a 16-tier tower of glasses with the bubbly.

For the third consecutive episode, detectives Michael and Louie were first to arrive at the pit stop, winning trips for two to Cancun for their efforts. Cowboys Jet and Cord were in second place again and the father-daughter team of Steve and Allie remained in third place. Lesbian couple Carole and Brandy moved up to fourth place, while brothers Dan and Jordan slipped back into fifth place.

Models Brent and Caite, like Jeff and Jordan, failed at the tower-building task and then went on to the alternative - grape hunting. But they managed to find the specially marked bunch of grapes before Jeff and Jordan, snagging the sixth place finish on the pit-stop mat.

Viewers knew things were not going to go well for Jeff and Jordan at the beginning of this race across the Champagne region of France when Jordan mistook Joan of Arc, whose statute they were seeking in Reims, for Noah, the builder of the ark.

It's possible Caite made the same error since she referred to St. Joan as a "he."

From the cathedral in Reims, teams went to a winery in Epernay, where one member descended into a cavern below ground to find a marked bottle of champagne among the thousands stored there.

In the last task at the Tattinger's winery, most teams chose to search a square kilometer for marked grapes rather than grapple with the glasses. Dan and Jordan were the only team to successfully complete the glass challenge. Two other teams tried it and moved on to the grapes.

The highlight of the segment may well have been the damage to the front bumper of Steve and Allie's car, which Steve managed to fix temporarily with duct tape.