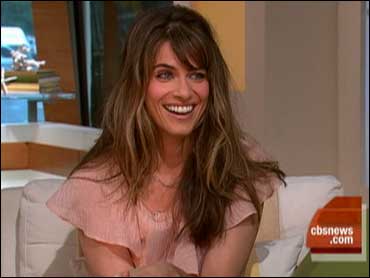 Actress Amanda Peet now understands the great lengths that "X-Files" stars David Duchovny and Gillian Anderson go to in their roles as paranormal investigators - especially in their upcoming film "The X-Files: I Want To Believe."

Peet takes on the role of FBI Agent Dakota Whitney and appears alongside Fox Mulder(Duchovny) during a chilly investigation.

While in the bitter cold, the two discover a frozen bathing suit that smells of chlorine, which calls them into action in search of a nearby swimming pool.

In the scene, Peet dons a big winter hat that looks a lot like the one Frances McDormand wore in "Fargo."

"It was so freezing that I wanted to look really pretty and have, like, a pretty hat. And then I realized how freezing it was," she told Early Show co-anchor Harry Smith.

Like her co-stars Duchovny and Anderson, who have been mum about their possible on-screen romance, Peet is divulging few details about the film.

"What's under that hat you don't know," Peet said. "It's like a 'Twilight Zone' episode," as she motioned antennae on her head with her hands.

"That would be the universal symbol for aliens under Frances McDormand 'Fargo' hats!" Smith said.

Known for her feisty role in "Saving Silverman," Peet has a great sense of humor.

What some may not know is that Peet has memorized all of the lines to the 1982 comedy "Tootsie," an homage to the late Sydney Pollack.

To prove it, she recited some of the lines from the famous "tomato scene" in the film between Pollack and Dustin Hoffman. Smith surprised her with a clip of the exact scene and her recitation was quite accurate.

"This is the best interview I've ever done! I really love you," she told Smith with affection. "I can't believe that you had 'Tootsie' ready. I am married but I do really love you!"
By Melissa Castellanos