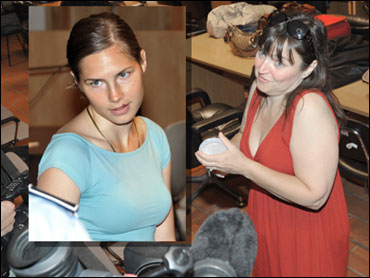 (CBS) At the end of March, Amanda Knox's parents will go on trial in Italy. Yes, you are reading that correctly - her parents.

Knox, herself, is the Seattle student who spent four years in prison for a murder an Italian court found her innocent of last October.

In 2009, Amanda Knox was convicted of murdering British student Meredith Kercher in Perugia, Italy. Last year, an Italian Appeals Court freed Knox ruling her earlier conviction "was not corroborated by any objective element of evidence."

Though their daughter may be out of the slammer, Amanda's parents, Edda Mellas and Curt Knox, could now find themselves sentenced to prison. In 2009, they were charged with criminal defamation in Perugia. Eight Perugia police officers claimed they were libeled when Amanda's parents told a British newspaper that their daughter was physically abused during a police interrogation. If convicted, Edda Mellas and Curt Knox could be sentenced to up to three years in prison in Italy and fined (neither parent plans to appear at the trial, nor does Amanda Knox, and there is not extradition for criminal defamation).

The parents' trial will start March 30th in Perugia; but perhaps Perugia - at least when it comes to Knox-related legal matters - would be better named Paranomia.  Last November, Gian Antonio Stella, writing in Milan's Corriere della Sera newspaper, bitingly compared Italy to the islands depicted in the 1901 utopian novel, Riallardo, the Archipelago of Exiles. The fictional isles of the Riallardo archipelago, Stella wrote, "Offered asylum to the misguided."

Stella's article mentioned one particular chain of islands that were cut off from the rest of the world by a permanent ring of dense fog. The novel said the inhabitants were "exiled for some craze they had developed on the subject of law". These isolated islands were named Paranomia.   In the book, one of Paranomia's islands had its own combined prosecutor-judges, they were called Justitiomaniacs, "who were not happy unless engaged in dealing out justice."  Endless trials proved a constant source of merriment. But, there was always the fear that they would run out of "real flesh-and-blood criminals to try, cases with a vein of tragedy running through them."

The solution for Paranomia: prosecute the innocent. After all, "where lay the talent or ability," asks the novel, in finding the guilty, guilty? In Paranomia, "there was something of true genius in convicting an innocent man and getting his friends to feel there was something wrong about him."

Edda Mellas and Curt Knox face a prosecution that could be straight out of old fantasy novel. Amanda's parents are charged under Articolo 368 Codice Penale, Libro Secondo, Titilo III. It defines the various degrees of criminal slander under Italian law.

In June 2008, Knox's parents did an interview with London Sunday Times correspondent John Follain. They told Follain what their daughter had told them; namely that during Amanda Knox's interrogation by Perugia police in November 2007, she was abused both physically and verbally and that she was hit in the back of the head.

This wasn't a scoop for either Follain or the Sunday Times. Seven months earlier, the London Daily Telegraph had first reported Amanda Knox's police brutality charges. There was no comment from the Perugia police in either story. In fact, Perugia police waited until February 2009 to publicly deny Amanda Knox's brutality charges. So as of June 2008, Curt Knox and Edda Mellas had reason to believe their daughter's version of events. And that could be a critical fact under Italian law and at their upcoming trial.

The Italian Supreme Court has consistently ruled, as recently as January 25th, that criminal slander only happens when "the person making the false accusation has acted intentionally and with the awareness and with the certainty of the innocence of the accused." Cutting through the legalese, slander in Italy is when you are accusing a person of doing something you know, for certain, they didn't do. But saying it publicly, anyway.

So why are Curt Knox and Edda Mellas being prosecuted? Perugia police could have, and by Italian law should have, recorded Amanda Knox's interrogation. But so far, no recording has surfaced. So how can anyone say, with certainty, that the police brutality didn't happen? And conversely, how could Curt Knox and Edda Mellas know, with certainty, that the Perugia police are telling the truth when the cops say they didn't brutalize their daughter during the interrogation in 2007? And then add in the fact that Perugia police waited two years to publicly refute the charges (in sworn testimony in February 2009 during Amanda Knox's first trial).

Apparently, none of this would have proved a problem in fictional Paranomia. Given its Alice in Wonderland style of jurisprudence, the island's solution would have been both obvious and alarming. The novel says the Justitiomaniacs, "rather preferred an innocent man for their experiments in justice."

Last year, back in real-life Perugia, a lawyer told the judge and jury deciding Amanda Knox's fate that the American honor student from Seattle was "a satanic, diabolic, she-devil given to borderline behavior." Not surprisingly, the lawyer offered no proof for his claims. It raises the question; could that kind of outburst be considered slander in Italy?

Stealing a line from Corriere della Sera's Gian Antonio Stella: "That would be in a serious country, not Paranomia."

This story was reported by CBS News' "48 Hours Mystery" producer Doug Longhini, who has covered the Amanda Knox case for several years.