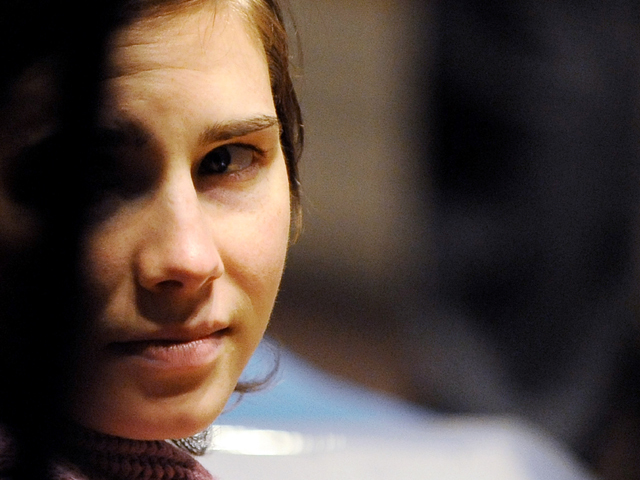 (CBS/KIRO) SEATTLE - The family of Amanda Knox released a scathing statement early Tuesday reacting to the Lifetime movie "Amanda Knox: Murder On Trial In Italy," which premiered Monday night on the cable channel.

Knox remains jailed in Italy while appealing her conviction in the murder of her British roommate, Meredith Kercher.

The made-for-TV movie, which features "Heroes" star Hayden Panettiere, aired despite opposition from both the family of Meredith Kercher and from lawyers representing Knox, reports CBS affiliate KIRO.

The following is the entire statement from the Knox family, obtained by CBS News.

"It is unfortunate that the Lifetime channel and its owners chose to air their movie about our daughter and the horrible murder and tragic loss of Meredith Kercher despite the wishes of all concerned not to do so. The selfish, profit-making motive behind their decision is sad and angers us as the inaccurate portrayals of Amanda and our families will lead many to believe that we are the way the actors have portrayed us, and the events are as they are portrayed in this piece of fiction. Amanda isn't, we are not and neither are the events.

None of the Lifetime channel's owners, writers, producers or actors know us, have never met us or Amanda, and obviously don't know who we are. The airing of this movie only furthers the false picture that has often been painted of Amanda and our family and the events that took place in Perugia.

Their lack of sensitivity for personal gain is hard to understand when so much is at stake for Amanda and Raffaele. The story they have told is riddled with a multitude of inaccuracies and we are deeply upset at its airing."

Theodore Simon, Amanda Knox's U.S. attorney, said: "The movie should not have been shown while the appeal is pending, particularly where the Court has decided to reopen the case, permit an independent examination of forensic evidence and the re-evaluation of witness reliability because, we strongly believe, doing so may violate fundamental principles of the Italian Constitution concerning the presumption of innocence and the right to a fair trial. The Court is now in the process of determining the facts. Additionally, we think it is obvious, the production of this movie only compounds this awful tragedy by demonstrating a shameful disregard to those mostly affected."

Kercher was slain on Nov. 1, 2007, in Perugia, Italy, in a case that has generated massive publicity in both the United States and Europe.

Knox, Sollecito and another man, Ivory Coast national Rudy Guede, were convicted of the murder in 2009 in the Italian courts. Knox was sentenced to 26 years in prison; Sollecito got 25 years. Both deny wrongdoing and their appeals trial is under way.

The trial of Amanda Knox has been covered extensively by CBS News' 48 Hours | Mystery.