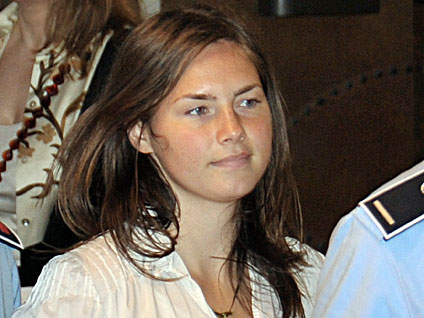 CHICAGO (CBS) In ancient Rome, Janus was the god of Gates and Doors -- endings and beginnings. Because the pagan deity was depicted with two faces, the Janus myth has given us the modern day diss, "two-faced." The old god hasn't been spotted in Italy lately. But there are times when Janus's double-dealing thumb seems firmly planted on the scales of Italian justice.

Take the case of American student Amanda Knox of Seattle, Washington and a prosecutor in Perugia, Italy.

Knox was found guilty of a 2007 murder in Italy. Giuliano Mignini was the relentless prosecutor.  As unlikely as it may seem, the two share one remarkable thing in common. Both Knox and Mignini are convicted criminals who have each been sentenced to prison in Italy!

Last December 5th, Knox was convicted of murdering her British roommate Meredith Kercher in Perugia. Six weeks later, a court in Florence said Mignini was guilty of abusing the considerable powers of his office while pursuing another, unrelated case.

Knox was sentenced to 26 years in prison. While she appeals her conviction, the young American is locked in a cell 23 hours a day, seven days a week. Janus's "Gates"... so to speak... slammed shut.

But for the zealous prosecutor, the mythic god's "Doors" remain open. The court in Florence sentenced Mignini to 16 months in prison. However, the Perugia prosecutor is allowed to remain free while he appeals his case, a process that could take years.

Because he violated the public trust, the Florence court banned Mignini from holding public office for the rest of his life. But, during his appeal, the prosecutor gets to remain in office. Mignini has not been called on to resign either.

Following his sentencing, Mignini told the media that he has a clear conscious and has done nothing wrong. Back on the job in Perugia, he is again in hot pursuit of some of his critics. Italian media have recently reported that the prosecutor has opened up criminal defamation cases against two Perugia lawyers associated with Amanda Knox's case.

Despite the breaks he's gotten since being convicted, Mignini probably has no appreciation of Janus. However, given his crimes, the prosecutor may have a fondness for Nemesis, the pagan Roman goddess of Revenge.