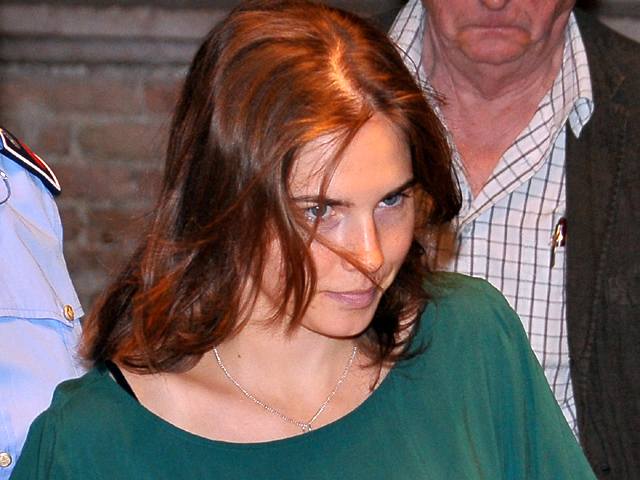 PERUGIA, Italy - Italian prosecutors sought to persuade an appeals court to uphold the murder conviction of Amanda Knox, saying during closing arguments Friday that "all clues converge toward the only possible result" of finding the young American woman and her co-defendant guilty.

Speaking for two hours in a packed room, Prosecutor Giancarlo Costagliola urged the jury to keep in mind the family of the victim, British student Meredith Kercher, who was Knox's roommate at the time of the slaying. His fellow prosecutor, Giuliano Mignini, urged the jurors to ignore the media hype and what he said was a pro-defendant slant surrounding the case.

A verdict in the appeals trial of Knox and her co-defendant and one-time boyfriend Raffaele Sollecito is expected at the end of September or early next month.

Costagliola denounced what he said was "an obsessive media campaign that makes everyone feel like the parents of Amanda Knox and Raffaele Sollecito."

"As you make your decision, I wish that you jurors feel a little bit like the parents of Meredith Kercher, a serious, studious girl whose life was taken by these two kids from good families."

Mignini claimed that the prosecution was "subjected to systematic denigration of a political and mediatic nature" and urged the jury to forget the pressure of an international press he said was overwhelmingly in favor of the defendants.

"The trial must be held here, in this courtroom," Mignini said. "This lobbying, this mediatic and political circus, this heavy interference, forget all of it!"

Mignini showed graphic photos from the murder, and said he will never forget seeing Kercher's eyes wide open as he went to inspect the crime scene. As if to emphasize the contrast, he also showed the court a photo of the two defendants kissing in the immediate aftermath of the killing outside the house that was being inspected by police. The move led Knox's lawyer to object.

Knox and Sollecito were convicted of sexually assaulting and murdering Kercher on the night of Nov. 1, 2007 in the house Knox and Kercher shared while exchange students in Perugia.

Knox was sentenced to 26 years in prison; Sollecito to 25. Both deny wrongdoing and have appealed the verdict, which was issued by a lower court in December 2009.

The prosecutors argue that the 21-year-old Kercher was the victim of a drug-fueled sex assault. In the original trial, the prosecutors had sought life sentences — Italy's stiffest punishment. Like the defendant, they have also appealed the lower court's verdict, as they can in Italy.

Costagliola, at the start of closing arguments expected to last two days, summed up what he said were the clues that point to the defendants: bloody footprints found in the house that are compatible with those of the defendants, cell phone activity and witness testimony that appear to contradict the defendant's alibi that they spent the night at Sollecito's house and stayed there until about 10 a.m. the day after the murder, a staged burglary at the house of the murder aimed at sidetracking the investigation.

Knox, 24, appeared tense during the session. Her mother, Edda Mellas, said it was hard for her "as she has to listen to people saying horrible and untrue things about her."

The independent review challenged both findings. It said police had made glaring errors in evidence collecting and that below-standard testing raised doubts over the attribution of DNA traces, both on the blade and on the bra clasp, which was collected from the crime scene several weeks after the murder.

The review boosted Knox's chances of being acquitted and freed after four years behind bars, and gave hope to her family.

Curt Knox, the defendant's father, said he was hopeful and grateful to the appellate court for having granted the review.

"We were not surprised with the results because this is what our defense experts were telling us all along," Curt Knox told The Associated Press in Perugia on the eve of the closing arguments. "I'm very thankful that the appeals court had the courage to authorize that independent review."

However, in court, Costagliola argued that the original finding could stand and said the review amounted to "a scientific falsification of the truth." Even when accepting some of the criticism in the review, he said, the jury should at least consider the traces of DNA evidence as strong clues incriminating the defendants, if not full-fledged evidence.

In an unusual move, Perugia Chief Prosecutor Giovanni Galati made an appearance at the beginning of Friday's session to express his support for the job done by prosecutors and investigators in the case, which had come under fire in the national and international media especially after the DNA review.

Next week, a lawyer representing the Kercher family and then the defense lawyers will make their closing arguments. Knox herself is expected to address the court in a final appeal to proclaim her innocence.

With young and photogenic defendants and tales of sex and drugs, the case has captivated audiences worldwide, drawing international media to Perugia since the beginning. On Friday, as the appeals trial draws to a close, the underground courtroom was packed with cameras, reporters and scores of curious residents.

A third person, Rudy Hermann Guede of the Ivory Coast, also has been convicted of Kercher's murder in a separate proceeding. Italy's highest criminal court has upheld Guede's conviction and his 16-year-prison sentence. Guede denies wrongdoing, though he admits he was in the house.

The prosecutors noted that Guede himself testified months ago that he believes Knox and Sollecito killed Kercher. They pointed out that Italy's highest court said in its ruling that Guede had not acted alone.

However, the court's ruling does not name Knox and Sollecito as Guede's accomplices.