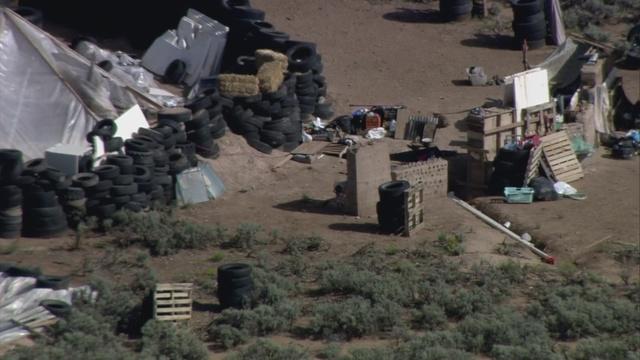 AMALIA, N.M. — A New Mexico sheriff says searchers have found the remains of a boy on property where authorities raided a makeshift compound last week in search of a missing Georgia child. Eleven children were found Friday in filthy conditions with hardly any food.

Taos County Sheriff Jerry Hogrefe said Tuesday that the remains were found after a search in Amalia. Authorities are awaiting a positive identification of the remains.

Authorities said the search for 4-year-old Abdul-ghani of Georgia led them Friday to the squalid compound where they found his father, Siraj Ibn Wahhaj, four other adults and 11 children.

"We discovered the remains yesterday on Abdul's fourth birthday," Hogrefe said, appearing to fight back tears.

The sheriff said authorities returned to the compound after interviews Friday and Saturday. He said information he and other law enforcement agencies obtained led them to believe the boy might still be on the property.

"We had a good idea of a target location to look for the child." he said.

CBS affiliate KRQE-TV reports that the malnourished children are in the custody of the state's Children, Youth and Families Department.

Wahhaj was expected to appear in court Wednesday on a previous warrant from Georgia that seeks his extradition to face a charge of abducting his son, Abdul-ghani, from that state last December.

In a court filing Monday, Abdul-ghani's father told the boy's mother before fleeing Georgia that he wanted to perform an exorcism on the child because he believed he was possessed by the devil. The boy's mother said the boy can't walk and requires constant attention.

The mother told police that Wahhaj took the boy for a trip to a park and never returned. Abdul-ghani was believed to have been at the Amalia compound as recently as several weeks ago, Hogrefe said.

The warrant said the boy suffered from severe medical issues including hypoxic-ischemic encephalopathy, a defect caused by lack of oxygen and blood flow around the time of birth.

Property owner Jason Badger said he and his wife had pressed authorities to remove the group from the makeshift compound on his land.

However, it took a plea for help and the search for the missing boy to finally draw sheriff's deputies to the desolate site that was walled off by stacks of old tires, wooden pallets and other debris.

Badger said he had concerns about the compound near the Colorado border. But he says the courts and other authorities shot down his attempts to break up the encampment — described as a trailer buried in the ground in Amalia, just south of the New Mexico-Colorado line.

Morton was among the five adults arrested after the Taos County sheriff raided the compound. Children ages 1 to 15 were rescued from the compound that had been under investigation for months.

Hogrefe said FBI agents had surveilled the area a few weeks ago but did not find probable cause to search the property. An FBI spokesman didn't immediately return a call by The Associated Press seeking comment.

Authorities staged a raid after someone believed to have been in the compound sent out a message for help that said: "We are starving and need food and water."

It wasn't clear who sent the message or how it was communicated. Georgia detectives forwarded the message to the Taos County Sheriff's Office.

Wahhaj was armed with several guns, including a loaded AR-15 assault rifle, when he was taken into custody without incident at the compound, the sheriff said.

Morton was taken into custody on suspicion of harboring a fugitive.

Tyler Anderson, who lives near the compound, believes the group had moved to the area to live off the grid, just as he had done.

Anderson said he had helped the newcomers install solar panels after they arrived in December. But he eventually stopped visiting the compound.

Anderson said the children found inside the compound at first played at neighboring properties but stopped in recent months.

The women, believed to be mothers of some of the children, have been identified as 35-year-old Jany Leveille, 38-year-old Hujrah Wahhaj, and 35-year-old Subhannah Wahhaj.

Jail booking photos show them wearing traditional Muslim veils or hijabs. It wasn't clear whether they had retained attorneys.

The public defender's office in Taos County did not immediately return a telephone message from The Associated Press seeking comment.

What authorities found Friday was what Hogrefe called "the saddest living conditions and poverty" he has seen in 30 years on the job.

Other than a few potatoes and a box of rice, there was little food in the compound, which Hogrefe said consisted of a small travel trailer buried in the ground and covered by plastic with no water, plumbing and electricity.

Hogrefe said the adults and children had no shoes, wore dirty rags for clothing and "looked like Third World country refugees."

The grandfather of the missing boy, Imam Siraj Wahhaj of Brooklyn, New York, issued a plea on Facebook for helping finding his grandson.

In a federal court filing in 2006, Siraj Ibn Wahhaj claimed he was harassed on his way to and from Morocco by customs agents at JFK Airport in New York because he is "the son of the famous Muslim Imam Siraj Wahhaj."