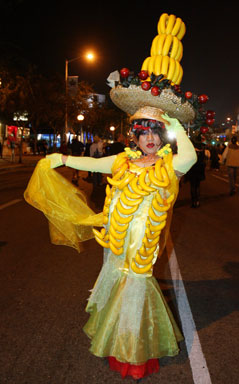 But results on whether it's effective against the disease are at least two years away.

Elan Pharmaceuticals' experimental vaccine raised tremendous excitement last year when the company discovered that in mice, the compound could ward off and even reduce the brain-clogging plaques that are a hallmark of Alzheimer's disease.

Researchers have determined Alzheimer's is caused by the build-up of protein-based plaques in the brain which disrupt normal brain function.

The vaccine works by stimulating the immune system to target and attack those plaques, causing them to shrink or even disappear.

Banned films around the world

If it works in people it could be used at the first sign of symptoms to slow, even halt, progress of the disease.

It is potentially a perfect tool for someone like Karen Dewar and her family. Dewar first started forgetting things at age 49. Her husband Robert knows what is ahead.

"It's likely to get progressively worse, and that can't help but be worrisome," he says.

Dewar takes a drug called Aracept, one of three commonly prescribed medications that can preserve brain function, but doctors like Dr. Steven DeKosky of the Alzheimer's Association say one day a vaccine could even prevent the disease.

"If we were able to detect people at high risk and give them something that was safe, it would be tremendously effective and tremendously helpful," he says.

Four million Americans now have Alzheimer's. It could be 14 million by the year 2025. For now a vaccine remains the next great hope.

But in the case of Alzheimer's, a disease half of all Americans can expect to get if they live to be 85, hope can be good medicine too.

The preliminary results come from Elan's small studies in people to see if the vaccine is safe. If the final results remain the same, the company hopes to launch larger studies, possibly by the end of 2001, to test whether the vaccine might slow progression of mild to moderate Alzheimer's disease -- and maybe improve symptoms.

In the first safety results from those Phase 1 trials, none of the 24 Americans with early Alzheimer's who received a vaccine injection suffered side effects, Schenk said. "There's no question the vaccine was well-tolerated," he told an international meeting of 2,800 Alzheimer's researchers.

Now comes an important second step: Elan is enrolling 80 British patients with early Alzheimer's into another Phase 1 study and giving them three shots of the vaccine over several months. Their immune systems will be checked for early signs that the vaccine is strong enough to activate immune cells necessary to fight disease.

Although no one knows if the vaccine ultimately will help, the experiments are hopeful because they are grounded in years of basic research into just what role the brain-clogging deposits, made of a sticky substance called amyloid, actually play, said Alzheimer's Association vice president Bill Theis.

Alzheimer's disease starts with forgetfulness but relentlessly progresses to full dementia until finally killing its victims. The three available drug treatments provide only partial relief for a short time.

Patients' brains are full of sticky amyloid plaques. It is not clear if the plaques cause Alzheimer's disease or are a result of it. Regardless, studies show they lead to death of brain cells.

The plaques' main ingredient is beta amyloid, a fragment of a normal body protein that somehow goes awry in Alzheimer's. Some patients produce too much beta amyloid and others simply do not clear it out of the brain properly.

Elan theorized that a vaccine made from beta amyloid would stimulate the immune system to recognize and attack the protein.

Indeed, vaccinated mice developed immune system antibodies that traveled to the brain and "tagged" amyloid plaques. That tagging seems to alert microglial cells, which Lieberburg calls the brain's "garbage-men," to head for the plaques and try to eradicate them. Upon dissection, the brains of vaccinated mice contained no or very small plaques while their unvaccinated littermates had extensive plaques.

Another study unveiled at the Alzheimer's meeting supports Elan's work. University of Toronto scientists taught mice bred to develop an Alzheimer's-like disease to swim through a water maze. Over several months, vaccinated mice remembered how to get through the maze far better than unvaccinated mice, promising evidence that the vaccine may affect symptoms, not just plaque.