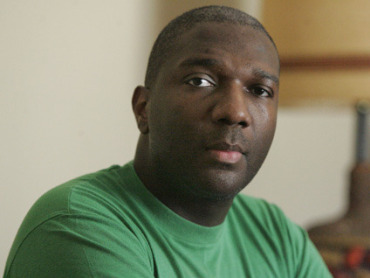 Since the South Carolina Democratic primary for the Senate took place earlier this month, it seemed like the only person not talking about Alvin Greene... was Alvin Greene. But Greene broke his silence to Time magazine reporter Michael Scherer in an interview released today.

"I am the best candidate for the United States Senate in South Carolina," Greene told Scherer. "And I am also the best person to be Time magazine's Man of the Year."

Greene also discussed what he hopes to accomplish in his campaign. He said that he wants to focus on three things: jobs, education and "justice in the judicial system." And according to Time, he wants to "curtail long jail sentences, for first-time, non violent crimes."

He continued, "My campaign slogan is 'Let's Get South Carolina Back to Work."

Since his primary election win last week, many have attempted to explain how Greene, an unemployed military veteran who is facing charges of exposing a student to explicit images, managed to defeat Vic Rawl, who was backed by the Democratic Party establishment.

Rep. Jim Clyburn (D-S.C.) accused Greene of being a plant and asked the U.S. Attorney General to conduct an investigation.

And State Democratic Party Chairwoman Carol Fowler asked Greene to withdraw after the felony charge against him was made public.

But Greene told Time that the heat he was receiving was undeserved.

"What about everyone else's mental state," Greene told Scherer after seeing a Fox News spot questioning his mental health. "It seems like things don't apply to me. I'm the nominee, and 60 percent isn't 60 percent anymore."

South Carolina Democrats are holding a meeting today to decide whether to overturn the results of the election.