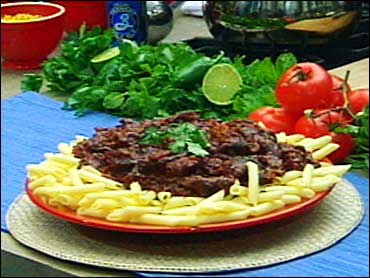 When it comes to cooking, Alton Brown says the most underused tool in the kitchen is actually the brain. He believes that one must first understand the science behind how heat, salt, and water affect the way foods cook, before one can truly become a master of the kitchen.

Alton's food-as-science concept appeared first on The Food Network. Now they can be found in his new cookbook, "I'm Just Here For The Food." Tuesday, he visits The Early Show to illustrate the concept of heat conduction as an ingredient through his recipe for pressurized chili.

For five seasons, Alton Brown has been the creative genius behind the Food Network program "Good Eats," which sets out to demystify for the home viewer why and how foods cook the way they do. "I'm Just Here For the Food" is an offshoot of the program.

His book tells us that conquering the use salt and water and the application heat, are the three things one needs to do to become a good cook. Alton believes if one can get the proportion of salt and water right in a recipe, then you're halfway there.

Water is a conduit for heat; it also carries flavors. Understanding how much water is in a food will determine how long it will keep. If one can properly season with salt, it is then easier to control the satisfaction of a meal.

Heat is the major piece of the puzzle, according to Alton. The right application and infusion of heat into a food is really where cooking begins and ends.

Alton says, "It doesn't matter about the spices if you don't know how to get heat into your food. Once you come to make peace with heat, you don't have to add much to have a great-tasting piece of food."

According to Alton, heat is an ingredient and should be considered so by anyone who wishes to become a better cook. He says: Don't think of heat in terms of temperature. Instead, think of heat as how one can move temperature around in a certain food so as to get the best flavor from that particular food.

Simply put, the structure of certain foods (be they from different food categories) can display similar characteristics when prepared via a particular heat technique (braising, roasting, searing, boiling, blanching etc.).

If this helps in understanding, Alton says meat and mushrooms respond very similarly to heat because of their moisture content; therefore, many of the same heat methods can be used to cook either of these foods.

The following is his recipe: