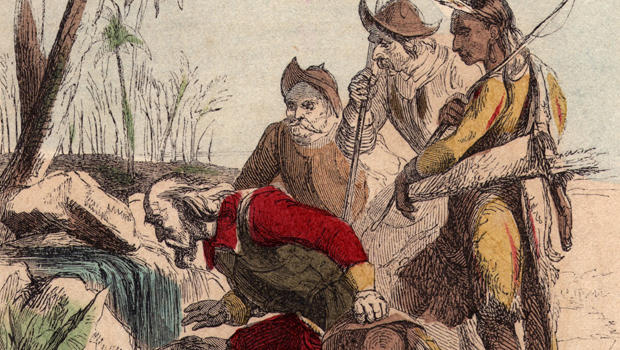 And now a page from our “Sunday Morning” Almanac: April 2, 1513, 504 years ago today … the day three ships commanded by Spanish explorer Juan Ponce de Leon arrived at a spot on the East Coast of Florida where a small landing party went ashore.

Eight years later, Ponce de Leon returned to Florida for a more thorough exploration, reputedly including a search for the so-called “Fountain of Youth,” a miraculous spring whose waters could reverse aging.

Modern scholarship has found no evidence that Ponce de Leon actually believed such a myth. And in any case, all he encountered on his return was a battle with a Native American tribe that left him dead from an arrow wound.

As for Florida, it became a Spanish colony until 1819, when it was acquired by the United States. Statehood followed in 1845.

And though no fountain of youth has ever been found in the Sunshine State, that doesn’t mean millions haven’t tried. Florida’s warm temperatures have long attracted retirees from up North looking to extend their active years.

The dream of “regained youth” was further popularized in the 1985 film “Cocoon,” in which a group of old friends plunged into a swimming pool containing mysterious and rejuvenating cocoons from outer space:

All fiction, of course! And far too late, in any event, to have extended the life of Juan Ponce de Leon.

​Alexander Hamilton: A life made for the stage