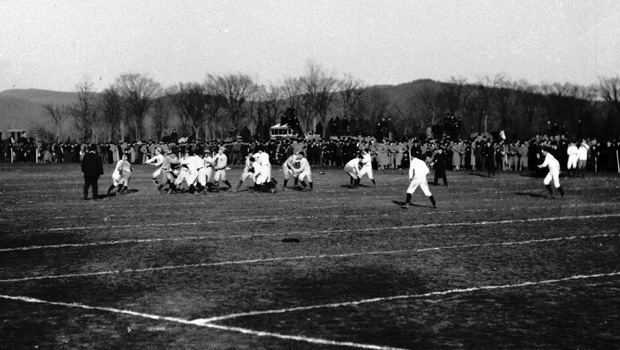 And now a page from our "Sunday Morning" Almanac: November 29th, 1890, 125 years ago today ... the day Army hosted Navy at West Point in their very first football game.

The rivalry almost died an early death in 1894, when both academies were forbidden to play anything but HOME games.

But following an appeal by Assistant Secretary of the Navy Theodore Roosevelt, the game was re-instated in 1899.

And with just a few interruptions, it's been "game on" ever since.

In fact, in the pre-Super Bowl era, Army-Navy was widely considered to be THE game.

Usually played on neutral ground in Philadelphia, the game has been a magnet for Presidents. Harry Truman was a frequent fan, and John F. Kennedy attended in 1962.

In the period of mourning following his assassination the very next year, it was Jacqueline Kennedy who urged that the game go on, as her late husband.

Navy won 21-to-15, in a game also remembered for featuring the very first instant replay ... a CBS Sports innovation, as it happens.

Sadly enough, we can't replay that replay for you now; it was erased long ago.

After 115 games, Navy currently leads the series with 59 wins to Army's 49, with seven ties.

This year's game, Number 116, is to be played on Saturday, December 12th, and it will be broadcast right here on CBS ... instant replays and all!

​Bill Nye the Science Guy: Here to change the world