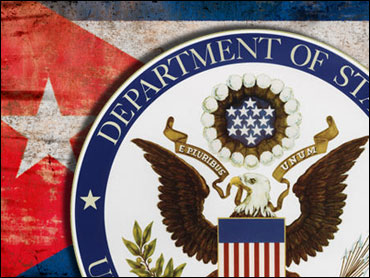 A U.S. judge has ordered a former State Department employee and his wife held without bond on charges of spying for Cuba.

Supporting their claim that the Myerses might flee, prosecutors told the judge that the last entry on a calendar found at the couple's home showed they planned to go sailing in the Caribbean in November.

In addition to the sail boat, prosecutors also said the Myers' have "family means," including an inheritance, more than a half-million dollars in investments, and a family "compound" in Nova Scotia. With less than 3 miles between the Myers' residence and the Cuban Interest Section in Washington, prosecutors also said the couple could just walk in the door and be out of reach forever, CBS News producer Stephanie Lambidakis reports.

U.S. authorities say Myers delivered government secrets to Cuban agents over the past 30 years using a shortwave radio, by swapping carts at a grocery store and in at least one face-to-face meeting with Fidel Castro in Cuba.