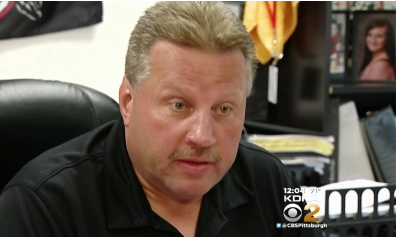 Video shows Couch gathering his belongings at the meeting and walking out. He was followed by police officers in uniform. A source told CBS Pittsburgh that Couch's gun, badge and patrol car were taken away.

This is reportedly related to the long-term and ongoing investigation into the Aliquippa Police Department by the State Attorney General's office, the state police and federal authorities.

The most recent component of that case is the investigation into the death of former teacher Rachael DelTondo, who was gunned down on Mother's Day weekend in her family's driveway.

The probe into the Aliquippa Police Department began in November when a police report was improperly leaked to the media. Those documents pertained to officers finding DelTondo in a parked car with an underage male.

Key players in the case have acknowledged there are many moving parts in this complex case.

This latest development is being characterized as a personnel matter. No officials commented publicly on why exactly the police chief was placed on administrative leave.