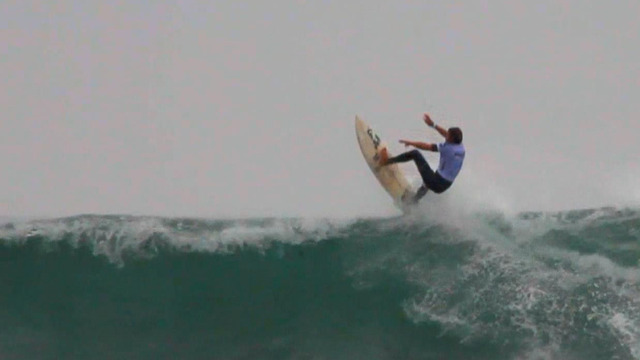 Surfing is a sport often described as spiritual -- about as close as you can get to being in sync with Mother Nature -- and now the industry is taking sustainability for a ride, CBS News' Carter Evans reports.

"When I'm in the ocean, I feel alive. That's something that resonates so deep within my soul that it literally lights me up," surfer Greg Long said.

It may come as a surprise that the tools of the trade are actually toxic to the environment. Wetsuits and surfboards have been made with harmful petroleum-based products for more than 50 years.

"There was no alternative," Long said. "This is what surfboards were being constructed out of. You're either going to ride them or you're not."

Long is one of the best big wave surfers in the world, paddling into swells six stories high. In 2014, he won Billabong's Ride of the Year.

Now, he's trying out the world's first surfboard made from algae.

"That's part of the exciting thing, you know, testing these new ideas, theories, equipment, advances in technology and making a difference in the future," Long said.

His deep commitment to sustainability surfaced after a terrible accident in 2012. He nearly died surfing a giant wall of water at Cortes Bank. The waves trapped him 30 feet below the surface.

"They pulled my body onto the rescue sled. I was completely stiff and unresponsive," Long said.

Now, he has a new purpose in life.

"I definitely see that as being a true gift. That significant event forced me to look at my life," he said. "'What is it that you really accomplished while you're here?' The platform that I've established within the surfing community, felt like I could have contributed a lot more."

Long teamed up with a non-profit called Sustainable Surf, urging lovers of the deep blue to go green.

It's the brainchild of Kevin Whilden, a scientist concerned with climate change, and social entrepreneur Michael Stewart.

"Our epiphany was, 'Hey, what if we used surfing and surf culture, beach culture to sell the idea of sustainability and a sustainable lifestyle that would actually do some good?'" Stewart said.

They worked with manufacturers to find ways to replace toxins like polyurethane and polyester resin.

"It's not rocket science; it's kind of regular science," Stewart said.

An algae-growing lab at the University of California in San Diego is where science meets the surf.

Long said eco-friendly boards perform just as good, or better, than traditional surfboards and only cost a few dollars more.

But it's more than just boards. From the sand to the sea, Sustainable Surf is an agent for change.

A "Waste to Waves" campaign encourages recycling Styrofoam that can be turned into material used in new surfboard cores called "blanks." There's even a company replacing neoprene in wetsuits with a product made from desert shrubs.

Surf culture has a long and colorful history of influencing pop culture. Today's ocean activists are hoping they'll inspire the next generation to cherish and protect the coastal environment. And with surf legends like Long on board, the industry is paddling in the right direction.

He said by next winter he'll have one or two algae-based boards to "have a go in the giant stuff."