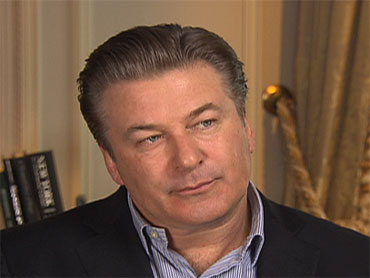 Forget the speculation that the world is coming to an end in 2012 - the American public seemed to be even more shocked when Alec Baldwin announced he's giving up acting when his contract with "30 Rock" ends, that same year.

With Oscar buzz for his new film "It's Complicated," Early Show co-anchor Harry Smith set out to find the reason for his declaration.

"I think to put that in the best context is that when you make movies, you can do films that people really appreciate on a critical level, but those parts are very, very difficult to find," Baldwin explained. "They don't make that many of those movies anymore."

For Baldwin, "the movies are about making money" and he knows firsthand what it's like when they don't.

"There was a long period of time where I made movies that didn't make any money. But when movies don't make money, it's dispiriting. You know, so I think, 'Well, maybe there's something else I can do that would work,'" he said.

Baldwin admits that this attraction towards a major life change has to do in part with his age - he's 51.

"And you sort of look at it and say, 'I don't know how much time is left on the clock,'" Smith said.

"That's pretty much what I'm saying, yeah," Baldwin laughed. "You've hit the nail on the...you've been reading my e-mail. Yeah, you sit there and you say, 'I have a lot of time left, but none to waste.' I don't want to do anything I don't want to do."

What Baldwin wants to do right now is be funny. He has won two Emmy Awards for the TV show "30 Rock."

And he stars on the big screen in "It's Complicated" with Hollywood's leading lady.

Sharing the screen with the legendary Meryl Streep is quite a thrill for Baldwin.

"You go to work, and the first couple of days, you really don't...you're not really working, you're kinda like, 'Huh?' And they say, 'Action.' And you're like, 'What? I'm sorry?' Because she's the most loveable woman you could possibly work with. She's such a great person," he said.

The thrills don't stop there. Oscar buzz is surrounding the comedic actor.

"That's impossible. To have to host the Oscars and stand there and say, 'And in our next category, Best Supporting Actor in - Me. And the winner is, him,'" he laughed. "That'd be nerve wracking either way! I really doubt that'll happen," Baldwin said.

"That would be an exquisite kind of torture, though," Smith added.

"Yeah, well that would be a very entertaining evening. It would be an Oscar show. Now, if people want to nominate me for an Oscar just to kind of gin up the tension on the Oscar show and make for an interesting Oscar show, be my guest," he joked. "If you want do it for that reason, then I applaud that decision."

In the meantime, Baldwin is thinking about the holidays, which includes time with his complicated family.

Baldwin, who gets along with his sisters, said that he's always asked "How do you get along with your brothers?"

"Well, in my family, it goes in cycles, he said. "So like, every six months, we pick one, and we all hate them. And we all realize, we always hated them. We never liked them. Like, we'll be on the phone with each other, 'Did you talk to so-and-so? No, I haven't spoken to him in a while' and then it's your turn, like it could be my turn for six months, and they all hate me.

"Then they come back, and they're like, 'Hey buddy, how you been? Don't you hate him? Isn't he the biggest (makes buzz noise) you've ever met? So we kinda rotate how much we all annoy each other."

"So, it's not your turn. Everybody loves you now?" Smith asked.