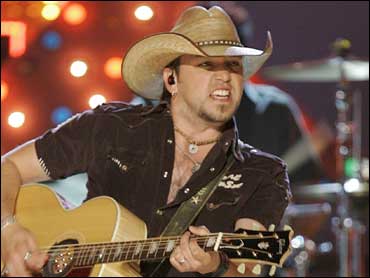 It's been quite a year for Jason Aldean and his CDs. The first one went platinum, the second nearly went up in smoke.

Aldean was in Las Vegas in February, shooting the video for his current single, "Johnny Cash," when he learned about the fire that all but leveled the recording studio in Nashville where his second album was in its final mix.

"It came four feet from the control room, which is where the album was. A few more feet and we would have been starting from scratch," he said.

Fortunately, the flames were stopped so "Relentless" could make its May 29 release date. It debuted at No. 1 on the country chart with 90,000 units sold.

The good year began about the same time as the fire, when Aldean's self-titled debut album sold its millionth album, wooing listeners and country radio with a blend of honky-tonk and country rock tempered by sweet ballads delivered in a rugged tenor. The stomping "Hicktown" hit the singles charts first, followed by the slower — and No. 1 — "Why," then mid-tempo "Amarillo Sky."

Aldean, who just turned 30, was named The Academy of Country Music's new male artist last year and was nominated for song of the year and video of the year in May.

"I felt like with our first album we were kind of able to find our niche," he said. "We hit a chord with people. We had our fan base, and that was something to build on. Some call it country rock. To my ear, it just sounds country."

The sophomore album puts up the same attitude on the fast stuff, with a little more attention to the slower songs and more thoughtful backgrounds throughout.

"I didn't want to overthink it too much. I wanted to stick pretty close to the things that we did with the first album. I think the songs are a little different," Aldean said.

If the songs are more varied, Aldean partially credits the success of his debut album. Although John Rich of Big & Rich contributed to his first three singles, with "Big" Kenny Alphin writing on two of them, Aldean had trouble getting material from other songwriters: "First time around, we had to dig a lot deeper to find great songs. This time, they were more willing to give them to us."

Aldean co-wrote three of the songs on his first album, but passed on the writing chores for "Relentless" to spend more of his hours off the road with his family. He and wife Jessica have a 4-year-old, Keeley, and are expecting their second daughter later this year.

Kind of a turnaround for a kid who arrived in Nashville to be a singer and was recruited as a songwriter.

After the teen years of soloing at Veterans of Foreign Wars halls, talent contests and fairs around Macon, Ga., he formed a band after graduating from high school that played around Alabama, Georgia and Florida.

In 1998, he performed his original songs for a showcase at The Buckboard in Atlanta. None of the record company talent scouts were interested, but Michael Knox, representing the Warner-Chappell song publishing company, was.

The Warner-Chappell writing deal and two subsequent record label contracts didn't work out and Aldean was about to head back to Georgia until a deal with Broken Bow Records reunited him with Knox, who has produced both of his records.

"The first time I saw Jason Aldean, I knew I couldn't have found a better act that gels the past and future of country music better than he does," Knox said. "He's got a unique sound we've been working together to perfect for almost 10 years now."