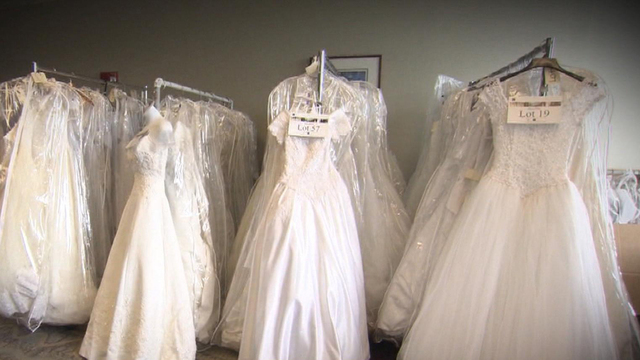 The seizure of thousands of bridal gowns and tuxedos from a federal drug bust led to an auction like no other, reports CBS News correspondent Jan Crawford.

Federal law enforcement broke up a drug ring in Alaska nearly three years ago at a bridal shop. The shop's owner went to prison, and now the government has to get rid of all that bridal merchandise-- offering the dresses to the highest bidder.

Charmai Harrell was in the market for a wedding dress, so when she heard on the radio about an auction of bridal goods, she decided to check it out. After all, the starting bid for these dream dresses were only $46.

"The only thing different between coming here to this auction and going to, say, a David's Bridal, is that you don't have the dress-trying-on experience; but it's better in the sense that the prices are much better," Harrell said.

The government trucked the Alaska bridal store's inventory nearly 4,000 miles down to a federal building in Atlanta.

"It's about some of the most unusual property I've ever seen in all of my career working, basically, in this business for the government," David Robbins, Director of the U.S. General Services Administration (GSA)'s Office of Personal Property Management, said.

When you think of property seized in drug raids, you think fast cars, speed boats and designer merchandise.

This auction, officially named "Down the aisle: A bridal sale extravaganza," is decidedly different.

"Maybe the bridal shop is where someone with drug money thought it was safer to hide their money," Robbins said.

Curious shoppers who can't make it to the Atlanta showcase can browse the lots online.

The GSA team is helping bring the production in under budget. They even had federal employees moonlighting as wedding models.

But the atmosphere of a bridal shop has GSA Officer Victoria Knotts thinking about saying "I do."

"I will be married 25 years next year, and I am thinking about renewing my vows," Knotts said.

Harrell isn't letting the origins of the dresses taint her once-in-a-lifetime experience.

"You still have that atmosphere of 'Oh this is an exciting moment in my life,'" she said. "They give you that bridal-gown experience, that traditional bridal-store experience."

The items total nearly half a million dollars, and last-minute bidding could keep the auction running until midnight.

The money they raise will go to the U.S. Marshals Service, and then given to crime victims and the agencies that helped with the raids.