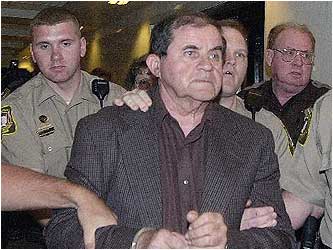 MONTGOMERY, Ala. -- Alabama's parole board decided Wednesday against freeing a one-time Ku Klux Klansman convicted in a church bombing that killed four black girls more than 50 years ago.

The decision to keep Thomas Edwin Blanton Jr., 78, imprisoned was met with applause at the hearing. Relatives of three of the slain girls spoke against Blanton's release during the hearing.

Blanton is the last surviving KKK member convicted of murder in the bombing of Birmingham's 16th Street Baptist Church.

He was convicted of murder and sentenced to life imprisonment in 2001 for being part of a group of Klansmen who planted a dynamite bomb that exploded outside the church on Sept. 15, 1963. The blast killed 11-year-old Denise McNair and 14-year-olds Addie Mae Collins, Carole Robertson and Cynthia Morris, also known as Cynthia Wesley.

The girls, who were inside the church preparing for worship, died instantly in a hail of bricks and stone that seriously injured Collins' sister, Sarah Collins Rudolph. Their deaths inside a church on a Sunday morning became a symbol worldwide of the depth of racial hatred in the segregated South.

Blanton did not attend the hearing, which lasted about 30 minutes. In Alabama, inmates do not attend such hearings. No one spoke on behalf of his release.

Relatives of all four victims were on hand, and the room was full of people opposing Blanton's parole. Members of the Birmingham NAACP chapter rode to Montgomery on a bus to be there.

Sarah Collins Rudolph, 65, of Birmingham, acknowledged she was nervous about testifying before the board, but added, "I had to come speak for Addie."

The board ordinarily has three members but there's a vacancy. Only two members heard Blanton's case, which came up for automatic review. Board member Cliff Walker said Blanton can seek another review in five years -- the longest possible wait under Alabama law. The board could have allowed him to return as quickly as one year.

Doug Jones, a former U.S. attorney who prosecuted Blanton on the state charge, had previously said Blanton shouldn't be released since he has never accepted responsibility for the bombing or expressed any remorse for a crime that was aimed at maintaining racial separation at a time when Birmingham's public schools were facing a court order to desegregate.

Blanton and Cherry were indicted in 2000 after the FBI reopened an investigation of the bombing. Evidence against Blanton included secret recordings that were made using FBI bugs at his home and in the car of a fellow Klansman turned informant.