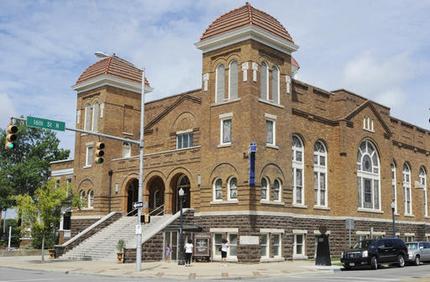 BIRMINGHAM, Ala. -- The lone surviving Ku Klux Klan member convicted in an Alabama church bombing that killed four black girls in 1963 is up for parole after spending 15 years in prison for murder, but civil rights activists spoke out Friday against any early release.

Members of the Birmingham NAACP and other groups held a news conference across the street from the church to protest the possible early release of Thomas Edwin Blanton Jr., 78.

Blanton is serving a life sentence for being part of a group of Klansmen who bombed the 16th Street Baptist Church, a gathering spot for demonstrators during the civil rights movement in Birmingham. Alabama's parole board on Wednesday is set to consider Blanton for release.

But Hezekiah Jackson, president of the Birmingham chapter of the National Association for the Advancement of Colored People, said freeing Blanton now during nationwide protests over police treatment of black people would send the wrong message.

"It is our further position that it would be a travesty of justice," said Jackson.

Prosecutors and members of the girls' families also are opposing Blanton's release, and some could speak to the parole board during the hearing scheduled in Montgomery.

A powerful bomb went off outside the church on Sept. 15, 1963, amid white opposition to desegregation of public schools. It killed 11-year-old Denise McNair and 14-year-old Addie Mae Collins, Carole Robertson and Cynthia Morris, also known as Cynthia Wesley.

Blanton, who has denied involvement in the bombing, is among three one-time Klansmen convicted years after the explosion. He and Bobby Frank Cherry were indicted in 2000 after the FBI reopened an investigation into the case, and jurors convicted Blanton the following year. Cherry was convicted in 2002 and died in prison.

Klansman Robert Chambliss, known as "Dynamite Bob," was convicted in 1977 and also died behind bars.

Harvey Henley, 79, recalled being at home a few miles from the church the morning the bomb went off. The blast was "the loudest thing I ever heard," and it shook the ground like a small earthquake. Blanton belongs in prison, Henley said at the news conference.

"He should never set foot outside of that jail cell again," he said.