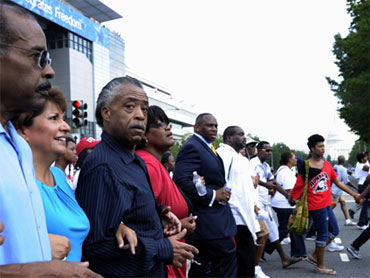 Two groups with competing Washington rallies briefly encountered each other during their activities, but while some participants shouted at each other there was no physical conflict.

The Rev. Al Sharpton was leading a march Saturday to commemorate the 47th anniversary of the March on Washington. During the march his group briefly encountered participants from a rally on the National Mall being headlined by Sarah Palin and conservative commentator Glenn Beck.

Marchers encountered the other crowds near the Washington Monument. Men in tri-cornered hats and people wearing tea party T-shirts looked on as marchers chanted "reclaim the dream" and "MLK, MLK" in reference to Martin Luther King Jr. Some marchers chanted "don't drink the tea" to people leaving Beck's rally.

One woman shouted to the marchers: "Go to church. Restore America with peace."

Both sides were generally restrained, although there was some mutual taunting.

Earlier Saturday, the group of civil rights activists organized by Sharpton held a counter rally at a high school, then embarked on the three-mile march to the site of a planned monument honoring King. The site, bordering the Tidal Basin, was not far from the Lincoln Memorial where Beck, Palin and others spoke about two hours earlier.

Sharpton told his rally it was important to keep King's dream alive and that despite progress more needs to be done. "Don't mistake progress for arrival," he said.

He poked fun at the Beck-organized rally, saying some participants were the same ones who used to call civil rights leaders troublemakers. "The folks who used to criticize us for marching are trying to have a march themselves," he said. He urged his group to be peaceful and not confrontational. "If people start heckling, smile at them," Sharpton said.

Eleanor Holmes Norton, the District of Columbia's delegate to Congress, said she remembers being at King's march on Washington in 1963. "Glenn Beck's march will change nothing. But you can't blame Glenn Beck for his March-on-Washington envy," she said.

Beck has said he did not intend to choose the King anniversary for his rally but had since decided it was "divine providence." He portrayed King as an American hero.

Sharpton and other critics have noted that, while Beck has long sprouted anti-government themes, King's famous march included an appeal to the federal government to do more to protect Americans' civil rights.