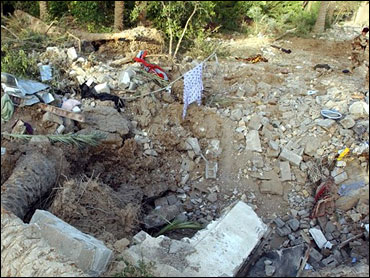 With the demise of Abu Musab al-Zarqawi, al Qaeda will be looking for a new sales approach in its worldwide fundraising campaigns.

Al-Zarqawi had become a key part of al Qaeda's marketing: He was a terror operator who stole headlines with jarring, gruesome attacks carried out by a network of foreign and Iraqi fighters. For more than three years, he evaded an international manhunt.

Counterterrorism officials have said al-Zarqawi served as a worldwide jihadist rallying point and a fundraising icon.

"The terrorist celeb, if you will," said Rep. Mike Rogers, R-Mich., a former FBI agent who serves on the House Intelligence Committee. "It is like selling for any organization. They are selling the success of Zarqawi in eluding capture in Iraq."

Some intelligence operatives suggest al Qaeda is glad al-Zarqawi is dead because he was a divisive figure who attacked Shiites and was generally unpopular, reports CBS News correspondent Elizabeth Palmer.

Al Qaeda may put someone in place who can get along better with Sunni insurgents and form a united front, which would spell more attacks against the coalition and the Iraqi government, whom they regard as stooges of the American government, Palmer adds.

Although the United States and its major allies have made progress in shutting down some sources of terror financing, they face many challenges. Terrorist financiers have moved beyond using the traditional banking system to fund violence.

Al Qaeda has struggled, too.

In a letter last year, al Qaeda's No. 2, Ayman al-Zawahiri, took al-Zarqawi up on his offer to send some money because many lines had been cut off. He and Osama bin Laden are thought to be hiding along the rugged Afghan-Pakistan border.

Al-Zawahiri asked for about 100,000, without specifying a currency. "We'll be very grateful to you," he said.

A U.S. counterterrorism official, who spoke on condition of anonymity in compliance with official policy, said Thursday the next chief of al Qaeda in Iraq won't be the same type of leader al-Zarqawi was, given his charisma, his Rolodex covering at least four continents and his credibility among terror operatives and aspirants. Al Qaeda in Iraq could also choose more than one person to lead the group.

No one knows who will emerge atop the organization. As of Friday, al Qaeda in Iraq had not announced its new leadership by issuing an Internet statement, a commonly used communication tool.

Speaking to reporters in Iraq on Thursday, Maj. Gen. William Caldwell said, "If you had to pick somebody" as the probable new leader, it would be an Egyptian named Abu al-Masri.

Several militant Internet forums were inundated with postings from supporters pledging to "hear and obey" another figure they claimed was the group's new leader: Abu Abdul-Rahman al-Iraqi, a deputy "emir," or leader.

On Friday, the U.S. military announced that a mortally wounded al-Zarqawi was still alive and mumbling on a gurney when Iraqi police arrived at the site bombed by U.S. forces.

There was some confusion over whether al-Iraqi was still alive. The U.S. military said a sheik with a similar name died in Wednesday night's air strike.

Other intelligence experts have mentioned a mysterious Iraqi named Abdullah Rashid al-Baghdadi. This year, he was reportedly made the political leader of five insurgent groups that formed the Mujahedeen Shura Council, or Consultative Council of Holy Warriors. The coalition includes al Qaeda in Iraq.

His selection would change the focus of al Qaeda in Iraq. Ken Katzman, a terrorism expert with the Congressional Research Service in Washington, said al-Baghdadi's interests lie in Iraq.

"His interests aren't in a global jihad," Katzman said.

The counterterrorism official said the group may decide to settle on an Iraqi, perhaps to give the group a less foreign feel. Al-Zarqawi was a Jordanian, Osama bin Laden was a Saudi before his citizenship was revoked, and al-Zawahiri is an Egyptian.

Still another candidate could emerge.

President Bush and other government leaders cautioned that al-Zarqawi's death was not likely to end Iraq's violence. A series of bombings killing nearly 40 people in Baghdad on Thursday confirmed that assessment.

Significant internal threats remain. Al Qaeda in Iraq has a decentralized command structure of regional emirs who no doubt are plotting attacks, former regime elements loyal to Saddam Hussein are resisting efforts to form a new government and sectarian militias are looking out for their radical interests.

"As they are developing a new leadership and improving their operational security, that is energy that can't be put into the fight against the government in Iraq," he said.

While praising the elimination of al-Zarqawi, some are also looking beyond Iraq.

The House Intelligence Committee's top Democrat, Rep. Jane Harman of California, said: "Even though he was the al Qaeda leader in Iraq, the threats around the world will not diminish because he is not there."