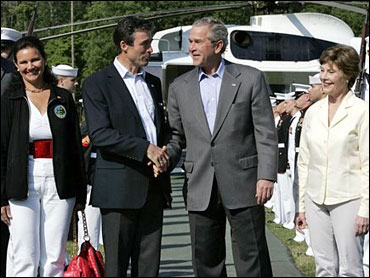 President Bush said Friday that it's not yet clear that Iraqi forces will be able to take control of their country's security within 18 months as the new leader there has said.

Making that determination depends on an assessment of the new government in Baghdad, which just on Thursday installed a new defense minister and other top national security posts, Mr. Bush said.

"I think we'll get a realistic appraisal about the capacity for standing up Iraqi troops as this new government begins to function," the president said, appearing here with Danish Prime Minister Anders Fogh Rasmussen, a staunch U.S. ally in Iraq. "Now they've got a defense minister which will give us time to assess their command-and-control."

The meeting came a day after the disclosure that terrorist leader Abu Musab al-Zarqawi had been killed by a U.S. airstrike in Iraq. Mr. Bush said again that al-Zarqawi's death would not stop the violence there or bring a speedy withdrawal of troops, but he celebrated it nonetheless.

Fogh Rasmussen recently visited Baghdad to meet with the new Iraqi Prime Minister, Nouri al-Maliki, who told him that he is optimistic that Iraqi forces can be in charge throughout the country by the end of 2007. Mr. Bush said that assessing this claim is a main reason that he is holding two days of talks on the way forward in Iraq next week at Camp David, with his national security advisers in his Cabinet and military commanders in Iraq.

White House officials have said that Mr. Bush and his advisers will not be meeting Monday and Tuesday to set precise timetables for U.S. troop withdrawals. With confidence in the president's handling of Iraq is at its lowest point ever, according to an AP-Ipsos poll, the president is under pressure to give Americans a sense of how much longer U.S. troops will be there.

CBS News chief White House correspondent Jim Axelrod reports that the Bush administration has been very careful not to oversell al-Zarqawi's death because there is no upside in such a sentiment.

Mr. Bush said he and his team would "analyze the new government ... look carefully at what their blueprint for the future looks like."

"We'll be able to give the American people a better feel for what stand-up-stand-down means," Mr. Bush said, referring to his position that U.S. troops would leave only as Iraqi forces are able to take over responsibility for security.

Fogh Rasmussen took Mr. Bush to task for recent scandals involving the U.S. military in Iraq — the alleged Marine massacre of Iraqi civilians in Haditha and the abuses of Iraqi prisoners at Abu Ghraib.

"When unacceptable events happen in Abu Ghraib and when allegations are made about horrible events in Haditha, it is not only a tragedy for the victims, it is damaging to our own efforts and an offense to our very own values," he said, with Mr. Bush at his side after their talks at the presidential retreat in Maryland's Catoctin Mountains. "The president has assured me that all allegations will be investigated and if there has been wrongdoing then the responsible will be prosecuted."

Mr. Bush did not mention either controversy, instead saying that his ally had talked to him about his concerns over the United States' detention of terrorism suspects at Guantanamo Bay, Cuba. Mr. Bush said that "we'd like it to be empty," but said he is waiting for the ability to try certain suspects in U.S. courts "once the Supreme Court makes its decision as to the proper venue for these trials."

Touching on another national security issue, Mr. Bush said Iran will have to decide soon whether to accept a package of incentives to abandon its nuclear weapons program or face the prospect of penalties.

"We've given the Iranians a limited period of time — you know, weeks not months — to digest a proposal to move forward," the president said. "And if they choose not to verifiably suspend their program, then there will be action taken in the U.N. Security Council."

Mr. Bush also defended the practice of "rendition," which involves sending suspects, without judicial review, to states where some allegedly are subject to torture.

"In cases where we're not able to extradite somebody who's dangerous, sometimes renditions take place," the president said. "It's been a part of our government for quite a period of time; not just my government, but previous administrations have done so in order to protect people. And, as we do so, we protect the sovereign rights of nations that we're involved with."

Mr. Bush and his wife, Laura, welcomed the prime minister and members of his family to Camp David — a gesture the president said reflected his "high regard for Prime Minister Rasmussen and our — the friendship between our two countries." Mr. Bush noted that it has been two years since another foreign leader has been granted the honor of a Camp David stay.

"One could hardly imagine a better venue to spend time for work and pleasure with close friends," Fogh Rasmussen said to his host.

Both leaders are fitness buffs, and each seemed ready to bolt from the meetings and joint appearance before reporters to start their planned bike ride around the wooded property.

Mr. Bush and Fogh Fasmussen each tried to out-humble the other before their excursion.

"It's important to have good weather today because the prime minister's going to give me a mountain biking lesson after this news conference," Mr. Bush quipped. "All in all we had a very constructive visit, which will be continued over lunch after the bike ride presuming he doesn't ride me into the ground."

Replied his guest: "I'm looking forward to exploring Camp David in even greater detail on bike. It's going to be hard work, I know that.

But I will do my very best to keep up with you, Mr. President."

Mr. Bush has been meeting with the Danish leader virtually every year since 2001, a reflection of his appreciation for Denmark's support for U.S. policies on a variety of fronts. Fogh Rasmussen also plans stops in San Francisco and Seattle before heading home.

Denmark has about 500 troops in Iraq supporting the U.S. commitment there and 360 more in Afghanistan as part of the NATO-led force. Danish officials note that their nation's contribution of troops is substantial for a country with just 5.4 million people.

Public support for the commitment is 40 percent in Denmark, according to polls, compared with 72 percent two years ago. Still, the Danish Parliament recently approved the government's plan to extend Danish participation in Iraq until June 2007.

"We are committed to remain in Iraq as long as the Iraqi government and the U.N. request our assistance and as long as we can make a positive difference,' Fogh Rasmussen said.

Villy Soevndal, leader of Denmark's opposition Socialist party, delivered a letter on Thursday to the U.S. Embassy in Copenhagen criticizing the Iraq war. He said it was "based on a lie" that Saddam Hussein's regime had weapons of mass destruction.