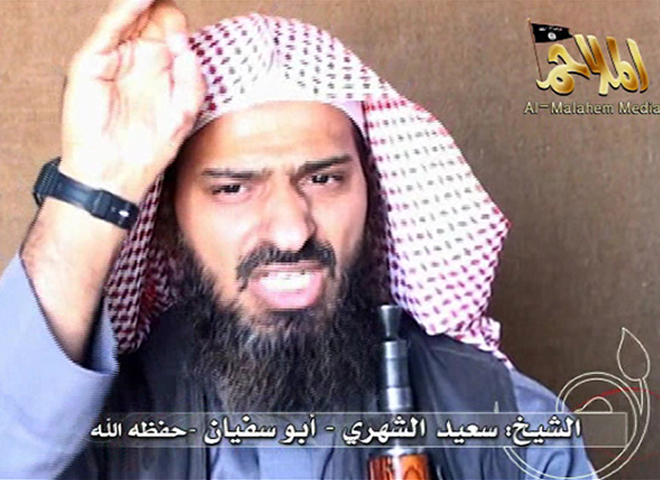 SANAA, Yemen The Yemen-based branch of al Qaeda said Wednesday that a U.S. drone strike had killed a former Guantanamo Bay prisoner who rose to become the group's No. 2 figure.

The announcement, posted on militant websites, gave no date for the death of Saudi-born Saeed al-Shihri.

In the video posted Wednesday, al-Shihri was eulogized by the senior religious figure from al Qaeda in the Arabian Peninsula (AQAP), Ibrahim al-Rubaish.

"I present my condolences to all the Mujahideen on the martyrdom of Saeed al-Shihri who was killed in a U.S. drone attack," said al-Rubaish, who also spent time at the U.S. prison camp in Guantanamo before being freed.

Al-Shihri, also known as Abu Sufyan al-Azdi, fought in Afghanistan and spent six years in Guantanamo. He was returned to Saudi Arabia in late 2007 and later fled to Yemen to join the al Qaeda branch there.

While al-Shihri may not have been a member of the core al Qaeda organization's leadership, his death is a serious blow to what many analysts consider the group's most dangerous franchise.

"These are the Saudi loyalists that bin Laden trusted the most," explained CBS News senior correspondent John Miller on CBS This Morning. "They have been, out of all the al Qaeda affiliates, the ones that have been the most effective in targeting America."