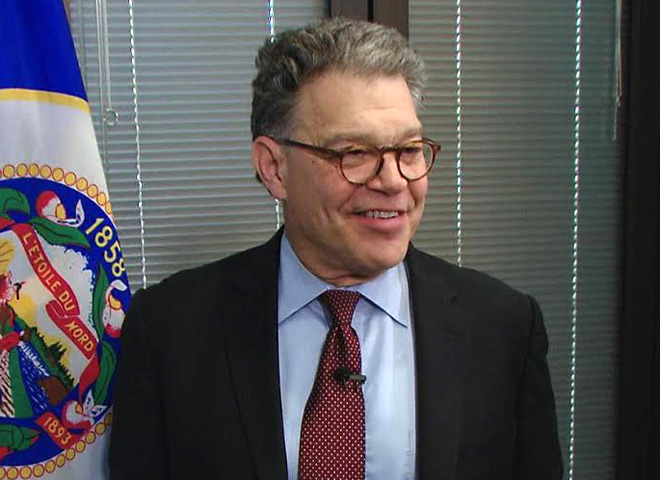 It seems just about every politician is running for president -- but Rita Braver has some Questions and Answers for Al Franken, a Senator who says he couldn't be happier with the job he already has:

Nor can a lot of people. After all, how many United States Senators have been regulars on "Saturday Night Live," pranced around as Mick Jagger, or held forth as self-help guru Stuart Smalley:

"'Cause I'm good enough, I'm smart enough, and doggone it, people like me."

It CAN get a little old. "I'm introduced as 'He's good enough, he's smart enough ...' That thing," said Franken. "And also when I started running was, you know, 'Al Franken, running for Senate -- no joke.' 'Franken elected -- no joke.'"

"I'm going to have to watch that in writing this story," said Braver.

"Yes, that right, that's my warning to you."

So, okay, no joke: 64-year-old Al Franken has established himself as a straight-talking, hard-working lawmaker who actually shows up for committee hearings, and is willing to reach across the aisle to get things done.

He makes friends his own quirky way, creating a Senatorial Secret Santa gift swap, and he hosts an annual hot dish competition for the Minnesota Congressional delegation. "Tim Walz is going for a three-peat here," said Franken, "which is kind of obnoxious."

He was raised on a middle-class street in suburban St. Louis Park, Minn., a suburb of Minneapolis.

"We had no quality time in my house -- we didn't go skiing or anything like that," he said. "But we had a lot of quality time, and a lot of that was watching comedies. My dad loved to laughed."

His dad was a printing salesman, his mom was a homemaker and real estate agent.

"I became interested in politics when I was about 11, 12, 13 years old, during the civil rights movement," he said." We were watching them sic dogs or club demonstrators. My dad would go, 'No Jew can be for that, no Jew can be for that.' That was probably when it crystallized to me how important public affairs are."

And Franken's fascination with both politics and comedy is actually on view in an unexpected place in his current house in Minneapolis: His "Nixon bathroom," featuring Elvis' letter to the president.

"My favorite sentence is, 'I have an in-depth study of drug abuse and Communist brainwashing technique and I am right in the middle of the whole thing.'"

Franken zeroed in on comedy as profession during college at Harvard. In 1975 he joined "Saturday Night Live," where he loved performing. But writing was even better.

"Coming up with stuff and laughing, and laughing so hard you're falling on the floor, that's the most fun you can ever have," he said.

Which of course raises the question: "Why would somebody who's so talented want to waste it on being in Congress?"

"Are you kidding me?" Franken said. "What a wonderful second chapter."

After almost 20 years on "SNL," Franken left and began to focus more on politics. He wrote satirical books, often poking fun at conservative political commentators. He went on to host a radio talk show on the now-defunct liberal Air America Network.

Then in 2006 he decided to move back home to Minnesota and run for the Senate. "I didn't blame anyone for being skeptical," he said. "I completely understood that."

It was a tight race against Republican incumbent Norm Coleman, and Franken believes an ad in which his wife, Franni, revealed her struggle with alcoholism turned the tide: "The Al Franken I know stood by me through thick and thin," she said. "So I know he'll always come through for Minnesotans."

"Well, it was an amazing thing for her to do,' he said. "Not only would I not have won had she not done that, and all the myriad of other things she did, but I would have lost by a lot. I would have been humliated!"

After a recount, and court challenges that lasted almost eight months, he was finally seated, with former Vice President Fritz Mondale (who'd once held the Senate seat) in attendance.

The voters thought he was "good enough" to re-elect in 2014, a year when many Democrats lost.

"I laid out who I was and what I had done, and where I had stood my ground when they came after the middle class," he said.

And yet, said Braver, "There's just a wide perception among people that Congress is a place of all talk and not much action. Isn't that somewhat frustrating for you?"

"To me, part of the problem is that the stuff that is getting done very often is just not covered, because it's not sexy," he replied.

"But look how long it took to get the new Attorney General in place."

"But it's exemplary of what happens here."

"It is exemplary of what happens here. So it's both: It's both, 'We actually get things done' and 'We don't get things done.' How's that?" he laughed.

"Don't you ever just feel like sitting down and ripping out a satire of what goes on in the committees, or what goes on on the Senate floor?"