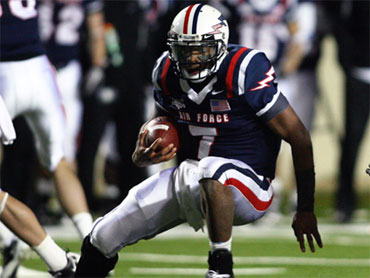 SHREVEPORT, La. - The Independence Bowl featured the two best running teams in the nation, and special teams proved to be the unlikely difference.

Air Force cashed in when Georgia Tech muffed a punt in the second half, getting a go-ahead touchdown run from Jared Tew in a 14-7 victory Monday.

Georgia Tech's 327 yards rushing per game this season edged Air Force's 317.9 average for the nation's top spot. Both teams use a heavy dose of option, which often catches opponents off guard because it's a relatively rare offense.

But with each defense familiar with the scheme, there were no surprises, and both teams were held under their season rushing average — Georgia Tech with 279 and Air Force with 170.

Georgia Tech (6-7) came into the game hobbled by injuries, academic casualties and misbehavior.

Joshua Nesbitt, the ACC's career leading rusher for a quarterback, missed the game because of a broken right arm. Top receiver Stephen Hill and starting safety Mario Edwards were among four players declared ineligible because of various academic issues.

On Sunday, the Yellow Jackets announced that three players — including defensive end Anthony Egbuniwe and defensive backs Michael Peterson and Louis Young — would miss the first half because of a curfew violation.

Even with all those issues, Georgia Tech probably would have won if not for the turnovers. Instead, the Yellow Jackets dropped their sixth consecutive bowl and posted their first losing season in 14 years.

Bell's 42-yard field goal gave Air Force the lead in the first quarter, but Georgia Tech responded with a 12-play, 69-yard drive capped by Anthony Allen's 5-yard touchdown run. The clock-chewing possession was all running plays stayed as the Yellow Jackets ran over and around the Falcons' defense.

Air Force was much more willing to take shots through the air, throwing 17 passes in the first half, but couldn't take advantage of its opportunities. Jonathan Warzeka dropped what looked to be a sure touchdown pass in the second quarter, and the Falcons couldn't convert on three fourth-down opportunities in the first half — including one that was well within field-goal range had they elected to kick.

The Yellow Jackets appeared to take control of the game in the second half, but a handful of crucial mistakes proved to be too much for them to overcome.

A nearly nine-minute drive opening the third ended when Washington fumbled on the Air Force 5. Then McKayhan's muffed punts

including the one at the Georgia Tech 14 that led to Air Force's winning touchdown — gave the Falcons terrific field position.

After Tew's scoring run, the Falcons converted the 2-point conversion on a Warzeka run.

Georgia Tech had one last chance to tie it, but a last-gasp pass toward the end zone was intercepted by Jon Davis.