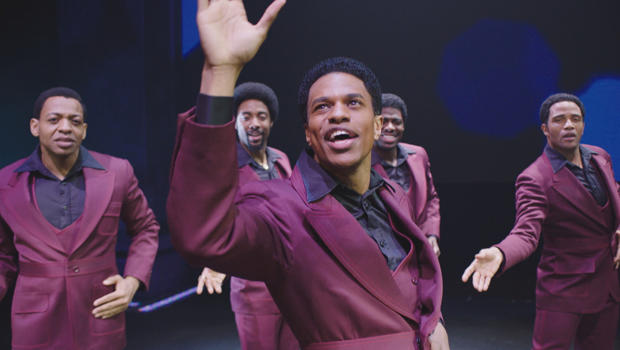 Close your eyes, and it's 1969 all over again. And while the men on stage aren't the real Temptations, just like the originals they can sing, and man, can they move.

They're in rehearsals for the new Broadway musical, "Ain't Too Proud: The Life and Times of The Temptations." The show is currently in previews, and opens later this month.

Correspondent Tracy Smith asked the cast, "I've heard this a lot, that, 'This was my parents' music.' Does that put pressure on you guys, this is a legacy you have to live up to?"

Derrick Baskin, who plays Otis Williams, replied, "It feels more like, kind of a love letter to them, you know?"

Ephraim Sykes, who plays David Ruffin, said, "I've always wanted to be a Temptation when I was, like, a little boy. Now, I got a shot, a lifelong dream!"

The story of "Ain't Too Proud" has been in the works for more than 50 years. It began when Detroit singer Otis Williams formed the group as The Elgins in 1960; they got a name change to The Temptations the following year after signing with Motown. Since then, only two things have stayed the same: the name, and Otis.

There have been around two dozen Temptations, and Williams, now 77 and living in Los Angeles, is the last original member.

He told Smith he never stopped believing in the group: "I knew we had something magic, 'cause I could tell by the way the audience would react to us."

But it took a while for that audience to find them. At first, The Temptations were known around Motown as the "no-hit wonders." But after about two dozen tries, their songs really started to chart, and they went on to become part of the soundtrack of the sixties.

Smith asked Williams, "Could you have ever imagined 50 years ago that The Temptations would be on Broadway?"

"You could've tipped me over with a feather before I would believe this would be happening to my life!" he replied. "See, I'm from Texarkana, raised by two grandmothers – from that scene to where I am now, a quantum leap. Never would imagine. So, God is truly in the blessing business!"

Of course, bringing The Temptations to Broadway meant cramming 50 years of Motown history, and music, into two hours.

But for Dominique Morisseau, who wrote the show's book, The Temptations' story has never been more relevant. "Here we are, at this moment in their story, where these young men are in a moment in their nation that's in great civic unrest," she said. "They're trying to navigate who they're gonna be as artists, coming from a city that is also in great civic unrest. And I thought, 'That's where we are right now. That's where we are once again.'"

As you might expect, the show tackles some of the drama behind The Temptations' music – and there was plenty of it: Tenor Paul Williams took his own life at 34; lead singer David Ruffin died of a drug overdose; bass Melvin Franklin had rheumatoid arthritis and died at 52, the same age that lung cancer took Eddie Kendricks.

Of course, not all of the problems were life-and-death. Otis Williams recalled that one of the group's biggest hits, "Papa Was a Rollin' Stone," almost didn't get recorded. "We were tired of that psychedelic soul," he said.

"You didn't wanna do that kind of music?" asked Smith.

"No, we didn't. But so I said, 'Come on, Temps, let's go and get this outta the way,' 'cause we were flying to Hawaii. I mean, we were tired of that stuff. But I have a gold and platinum hanging on the wall, so, that's good!"

When asked his favorite song, he replied, "'My Girl.' I'm a big Temptation fan!"

Smith asked, "What have you guys learned about The Temptations?"

Pope said, "We realize just how much they had to sacrifice to be who they are, to get where they got."

And they also learned just how physically tough it is to be a Temptation, doing two hours a night, eight times a week. And one of the craziest moves came from the last Temptation himself.

Williams told them, "Now, if you really wanna capture the essence of The Temps, the original Temps, David Ruffin would throw the microphone up, spin around, drop to his knees and as the mic come down he would grab it."

Sykes recalled: "He was like, 'If you can do that one move for me, you'd really have David.' I said, 'Otis, come back next week.'

Talk about singing and dancing your heart out – it's no wonder that for Williams, being a Temptation just never got old: "I always tell people success can be such a strong aphrodisiac. I mean, we were riding so high in the success of our life story that I actually would have to go off to the side and do this here, pinch myself. I said, 'I can't believe this.' And the ride has been so intoxicating that I'm enjoying it still even with all the, you know, the changes that I've gone through."

And if success is measured in standing ovations, The Temptations' long ride is far from over.