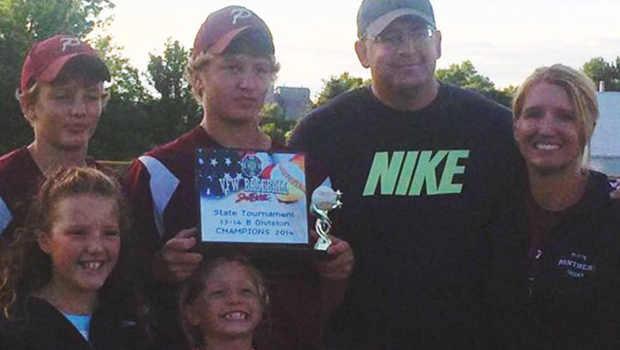 PLATTE, S.D. -- A South Dakota couple who died in a murder-suicide last year stole hundreds of thousands of dollars that were intended to be used to help improve Native Americans' college readiness, among other things, state Attorney General Marty Jackley said Wednesday.

Investigators believe the total amount that Scott and Nicole Westerhuis stole exceeded $1 million, based on a review of financial records. They spent at least part of the money on home improvement projects, Jackley said at a news conference in Platte.

Three other people associated with the Mid-Central Educational Cooperative and the GEAR UP college-readiness grant program are also facing felony charges stemming from the investigation launched after Scott Westerhuis shot his wife and their four children before setting fire to their house near Platte and killing himself.

The deaths occurred just hours after the state informed Mid-Central that it was losing a $4.3 million federal contract for GEAR UP because of financial problems and accounting failures. The two initially tried to hide the alleged illegal activity that started as early as 2010, but became more brazen near the time of the September 2015 fire, according to a court affidavit.

Scott Westerhuis served as Mid-Central's business manager and Nicole Westerhuis was the assistant business manager. In addition to working at the cooperative, the two had ties to nonprofit organizations that received GEAR UP funding, including the American Indian Institute for Innovation.

According to court documents, the couple took money from Mid-Central's bank account without authorization to fund the American Indian Institute for Innovation's payroll. At the end of November 2015, the institute owed Mid-Central as much as $826,000 for payroll, Stephanie Hubers, a former business employee at Mid-Central, told a state investigator.

Hubers faces felony charges related to theft or receiving stolen property. Dan Guericke, Mid-Central's director, has been charged with six felony counts. Stacy Phelps, who has served as chief executive of the American Indian Institute for Innovation, is charged with four felony counts.

The three voluntarily turned themselves in on arrest warrants and have been released on bond conditions, Jackley's office said.

Guericke and Phelps are accused of backdating two contracts between Mid-Central and the American Indian Institute for Innovation in August 2015 before they were made available to the state Department of Legislative Audit. Investigators say in the court records they believe the contract changes were an attempt to avoid a potential audit of the Institute.

Guericke is also accused of conspiring with Scott and Nicole Westerhuis to backdate contracts with other individuals.

Hubers is accused of receiving money from the American Indian Institute for Innovation that she wasn't entitled to or that she knew had been stolen. She is also accused of providing false invoices to the Institute that indicated she had provided services she did not perform.

Hubers' attorney declined to comment on her behalf or make her available for an interview, and court records didn't list lawyers for Guericke and Phelps. Mid-Central's lawyer, Scott Swier, said he isn't authorized to provide attorney information for Guericke. Mid-Central governing board Chairwoman Pamela Haukaas said Guericke has been placed on administrative leave.

An attorney for the American Indian Institute for Innovation said Phelps is no longer an employee there.

People in the community told CBS affiliate KELO they are still heartbroken, but are satisfied with Wednesday's the criminal charges.

"How it has affected an entire community, you know. It's really sad. Really a hard one," Jody Ringling said.

Both Ringling and Renae Kuipers worked for Mid-Central Educational Cooperative in the late '70s and early '80s. Kuipers said it was hard to see the co-op's evolution, but she believes criminal charges are deserved.

"It's our money! It's our taxpayer money," Kuipers said. "If it's been wronged, you know, somebody needs to pay for it!"

Ringling also lives down the street from the Westerhuis property, which is now essentially reduced to a foundation. The home is gone, but Ringling says a lot of questions about the expansive multi-million dollar spread remain.

"First of all, I think the community always knew there was something kind of screwy going on," Ringling said.

Swier has previously said the cooperative was aware of Scott Westerhuis' ties to the nonprofits but wasn't aware of the extent of the affiliation.

"I know our family still misses the children very much," Platte resident Kristi Pheifer said Wednesday from the crowd. "If you live a life of money and secrets, it ends in tragedy."