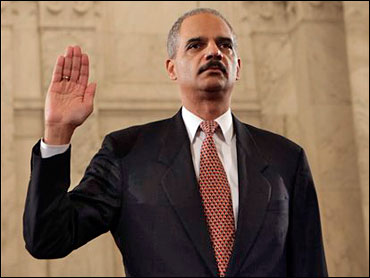 It was the latest signal that President-elect Barack Obama will chart a new course in combatting terrorism. As recently as last week, Vice President Dick Cheney defended waterboarding, a harsh interrogation tactic that simulates drowning, saying it provided valuable intelligence.

It was the first topic discussed at Holder's confirmation hearing, and he made an unambiguous statement about its nature: "Waterboarding is torture."

The declaration sent a wave of approval through the public viewing gallery, where protesters, dressed in orange prison scrubs like those worn by detainees at the Guantanamo Bay military prison, held signs calling for an end to torture.

Obama has described Guantanamo Bay as a "sad chapter in American history." He plans to issue an executive order calling for the prison to be closed.

Holder echoed that stance Thursday but said shuttering the prison would be difficult and would take time. Many detainees could be transferred to other countries, he said, and some could be charged in U.S. courts. That is a contentious proposal because many oppose the idea of bringing terrorism suspects onto U.S. soil.

"There are possibly many other people who are not going to be able to be tried but who nevertheless are dangerous to this country," Holder said. "We're going to have to try to figure out what we do with them."

Holder promised to be an independent attorney general, telling lawmakers that he did not believe the attorney general's job was to serve as the president's lawyer - a frequent criticism of Gonzales' tenure under President George W. Bush.

"I have shown that I have the ability, and frankly the guts, to be independent from the people" who put me in power, Holder said. "I will be the people's lawyer."

"He is aware, he reassured Committee members, that the Attorney General slot is different from other Cabinet-level positions because of the need to adhere to the Constitution and rule of law over the partisan needs of any given White House," says CBS News legal analyst Andrew Cohen.

He also pledged to restore the independence of a Justice Department where Bush administration appointees used political benchmarks when making hiring decisions.

"One of the things I'm going to have to do as attorney general in short order is basically do a damage assessment," Holder said.

At the very same time that Holder was answering questions about the legality of the nation's controversial warrantless surveillance programs, the Foreign Intelligence Surveillance Act Court of Review was taking the extraordinary step of publicly releasing one of its secret opinions.

The court ruling endorsed the Bush Administration's expansive view of law enforcement power to spy without prior court approval on international phone calls and emails even when they involve communications between and among Americans, reports Cohen.

"President-elect Barack Obama endorsed during his time in the U.S. Senate the latest version of the current administration's surveillance policy," notes Cohen. "That means that Holder now must gingerly evaluate how the warrantless program came about, whether it is working to its fullest extent, whether and to what extent it reaches too far in infringing constitutional privacy rights, and what can be done if it does."

While the GOP was expected to use the confirmation hearing to demonstrate that the party is still relevant despite a Democratic sweep in November, Holder was largely spared any confrontational questions during the morning hours of the daylong hearing.

After Holder issued his opinion on waterboarding, Republican Sen. Arlen Specter turned the questioning briefly toward the 2001 pardon of fugitive financier Marc Rich. Holder, who was the No. 2 official at the Justice Department at the time, told the White House that he was neutral, leaning toward favoring the pardon. On Thursday, Holder repeated an apology, saying he regrets not studying the pardon more.

But Holder said he learned from the mistake and would be a better attorney general because of the experience.

Sen. Jeff Sessions, R-Ala., later questioned Holder about his role in President Clinton's decision to grant clemency to Puerto Rican separatists involved in the deadly 1982 bombing of a Manhattan federal building. The 16 members of the Armed Forces of National Liberation served 19 years in prison before the clemency was awarded.

Though human rights groups applauded the decision, lawmakers from both parties criticized the move. Holder said Thursday that it was a difficult decision for Clinton but described it as "reasonable," contending that those released from prison did not carry out the violent acts. Former FBI officials have disputed that view.

If confirmed, Holder would be the nation's first African-American attorney general. No Republican has announced plans to oppose Holder's nomination.