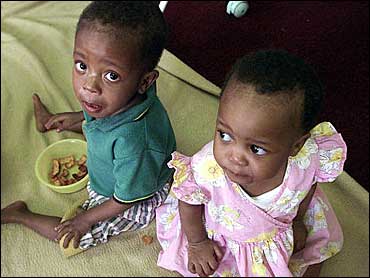 AIDS has already orphaned more than 11 million African children under the age of 15, and "the worst is yet to come," warns a report issued Wednesday by the U.N. Children's Fund.

By 2010, there will be about 20 million children in sub-Saharan Africa who have lost at least one parent to AIDS, bringing the total number of orphans in the region to 42 million.

In the worst affected countries — Botswana, Lesotho, Swaziland and Zimbabwe — more than one in five children will be orphans by 2010 — more than 80 percent of them because of AIDS, according to the report "Africa's Orphaned Generations."

Even in countries like Uganda, where HIV prevalence has stabilized or fallen, the number of orphans will remain high because of the proportion of adults already infected with HIV — few of whom have access to life-prolonging anti-retroviral drugs.

These children — half of them between the ages of 10 and 14 — are left without critical guidance, protection and support, the report warned. They are also at risk of malnutrition, physical and sexual abuse, and exposure to HIV infection.

"We need to move beyond feeling beleaguered to feeling outraged by the unacceptable suffering of children," UNICEF Executive Director Carol Bellamy said in a statement Wednesday.

Extended families are caring for 90 percent of African orphans, the report said.

In many countries, a growing number of these households are headed by women and grandparents. Already generally poorer, they are less and less able to provide adequately for the children in their care — and their burden is only set to increase.

To make matters worse, many of the most severely affected countries have no policies to address the needs of orphans, the report found.

The failure to respond to the orphan crisis jeopardizes not only the children's future, but also the development prospects of their communities and countries, it said.

Sub-Saharan Africa is home to nearly three-quarters of the world's HIV-infected population. Eight out of every 10 children who have lost parents to AIDS live in this region.

Children in HIV affected households begin to suffer even before a parent dies. Not only do they go through the trauma of witnessing their parents' illness and death, but they are likely to be poorer and less healthy than other children, the report said.

Household incomes plummet when adults fall ill from HIV because they can no longer work full time, if at all. The amount of land they cultivate drops, and with it food supplies, even as health care expenses soar.

Many children are forced to drop out of school because they can't afford the fees, have to care for a sick parent, or need to earn money.

As a result, they are more likely to suffer damage to their cognitive and emotional development, to have less education, and to be subjected to the worst forms of child labor — including domestic work, quarrying and commercial sex work — UNICEF warned.

The report argues that the course of the crisis can be altered by providing immediate help to families and communities, including offering free basic education, giving them safe and viable options for earning a living, and providing them with financial and other assistance.

This is critical in a region where only around 1 percent of the 29 million people living with HIV and AIDS have access to life-prolonging medicines widely available in wealthier countries, UNICEF said.

"We must keep parents alive and ensure that orphans and other vulnerable children stay in school and are protected from exploitation and abuse," Bellamy said. "The future of Africa depends upon it."